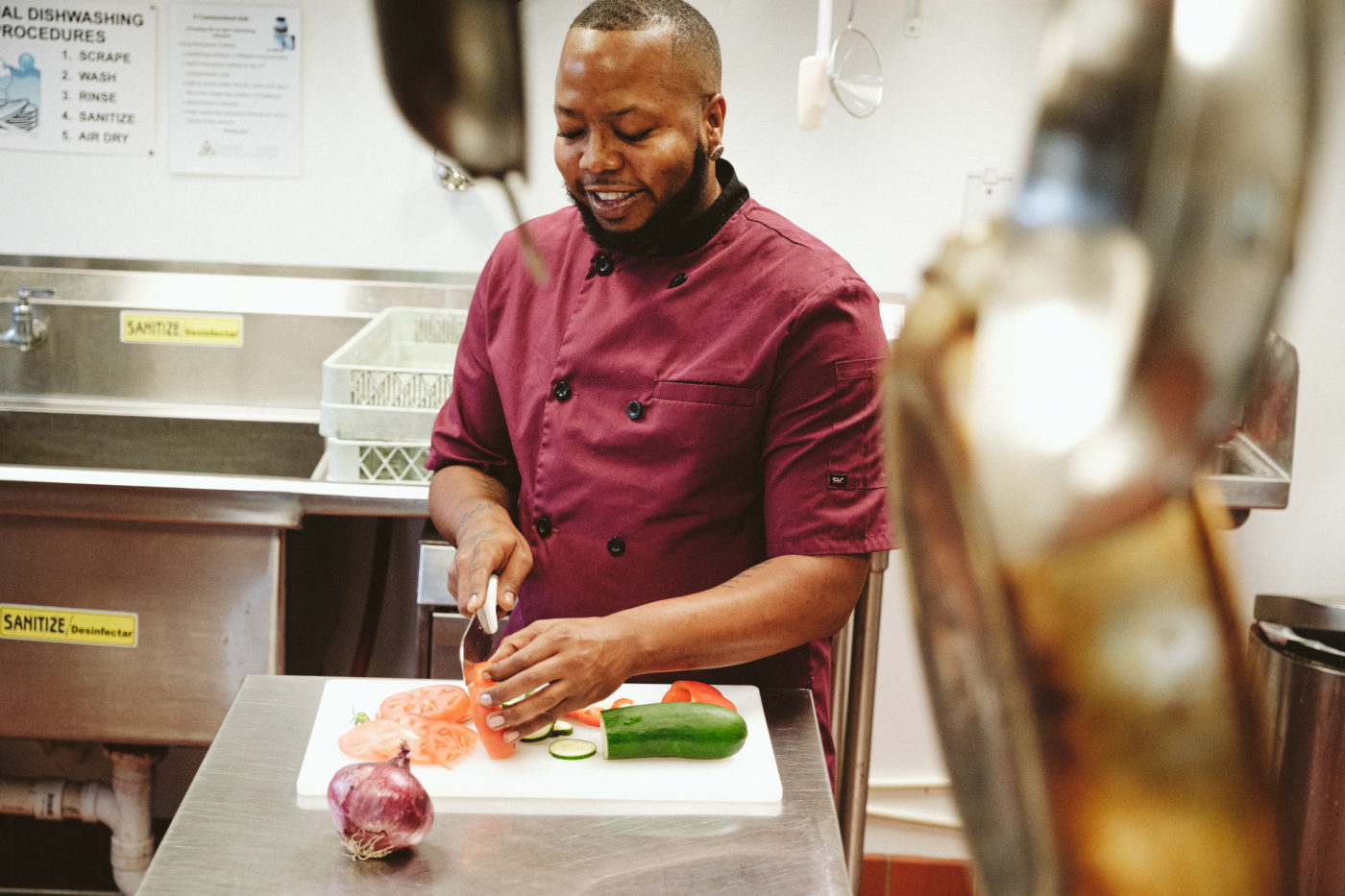 When Terrence Smith walked into the Bread & Roses commissary kitchen for the first time in 2019, his childhood dream of cooking professionally became his reality.

Smith looked at the bright, clean space full of gleaming steel appliances, prep tables and a convection oven, and felt a sense of fulfillment. At last he could start his soul food catering business, Taste of Tee.

Smith is one of about 20 local food entrepreneurs to launch a culinary business from the Bread & Roses commissary kitchen since it opened in 2015. And with the installation of a new walk-in cooler in June, the kitchen is poised to double the number of chefs it can help nab a seat at the Charlottesville culinary table.

The commissary kitchen is one of those programs.

“It was created to essentially have a commissary that was affordable for new food entrepreneurs in the area, to allow them to have access to participation in the local food economy,” said Pitts.

In particular, Bread & Roses has been a place where chefs of color and immigrant chefs have gotten a start. Caribbean cafe and catering outfit Pearl Island and Middle Eastern halal food stand (and city market staple) Khadijah’s Kitchen, both run by immigrant chefs and beloved by the community, are just two of those spots.

“Oftentimes, it is the obscure ethnic foods that can enrich a community with culinary diversity,” said Mochiko chef Riki Tanabe, a native of Hawaii and former Bread & Roses tenant. “And making a commercial kitchen accessible to an immigrant chef with limited resources is very empowering.”

The walk-in cooler is an investment in that mission, said Pitts. The $35,000 cost was a collaborative funding effort between the City of Charlottesville — which gave $10,000 toward the cooler — along with Trinity and a few other local churches, including St. Paul’s Episcopal Church in Ivy and Emmanuel Episcopal Church in Greenwood.

Commercial kitchen space is hard to find in Charlottesville, said the chefs interviewed for this story, and that can prohibit some talented, hardworking cooks from starting their own business.

The Bread & Roses commissary is one of just a few in the area, the next closest being in Ruckersville and Goochland, said Pitts. “The distance can be a barrier for folks.”

Price can be a barrier, too. Bread & Roses rents its kitchen out for between $20-35 per hour, based on the company’s time needs, said Pitts. For instance, a chef wanting 10 hours a month could pay around $200 per month to use the space. Other kitchens have similar hourly prices ($25-35/hour) but require more expensive monthly commitments (upwards of $1,000 minimum).

Smith, who turned 30 this month, quit his job three years ago to take a chance on cooking full-time and was relieved to find a kitchen he could afford. Bread & Roses program coordinators also helped him learn what requirements he’d need to meet for his Virginia Department of Health certification, and more, and he found that support particularly helpful as he got going.

Business is good, said Smith. “Really, really good.” He’s catered a number of events in town and is starting to expand his clientele with events in Richmond, Charlotte, North Carolina, and even Atlanta. He’s catered a few celebrity events, too, though he kept mum about which stars he’s fed with his fried chicken, baked mac, collard greens, and pork chitlins.

It’s been an incredible journey from the humble beginnings of his soul food catering business: Sitting with his twin sister while watching their mother, grandmother, and father — who is also a chef — cook delicious meals for them to enjoy together in their Charlottesville home.

The new walk-in will ensure that the ingredients for Smith’s star seller — seafood salad — will be kept cold before they’re ready to be cooked and served, he said. “The old one they used to have, when it would get really hot and I’d try to store food in there, it would go bad, or spoil.” That was time, money, and food wasted, something no chef wants to see.

Tom Kelly, who started Crustworthy mobile wood-fired pizza out of the Bread and Roses kitchen just a few weeks ago, is similarly excited about the new walk-in cooler. The amount of ingredients Kelly prepares each week for his food truck — anywhere from 200 to 300 raw sourdough dough balls and dozens of pounds of toppings — would have taken up every inch of two old, and much smaller, coolers, leaving no space for other chefs, like Smith, who share the space.

What’s more, the new units allow for more types of prep work. For example, cooking ten pounds of sausage and tossing it into a small refrigerator is not going to cool quickly enough to meet health department standards, said Kelly. “That’s just the way you have to do it in a commercial kitchen. When you have a huge walk-in cooler where it’s powerful and can chill the ingredients down appropriately, on the right schedule, then we’re in a good place,” he said, adding that without that cooling capacity, Crustworthy wouldn’t be a viable business.

Testing out whether or not Crustworthy is a viable business by renting commercial kitchen space, instead of going all-in on a brick-and-mortar spot, was another appealing thing about the Bread & Roses kitchen, said Kelly.

Renting space with Bread & Roses allowed Tanabe to satisfy Health Department requirements so that he could start Mochiko as a food stand at the Charlottesville City Market, then as a food trailer, and then into its brick-and-mortar space at 5th Street Station, where Mochiko has been since spring 2019.

The new cooler will be fully functional this month.

In addition to supporting the chefs, the new cooler will also help feed local families. Trinity will now be able to store more produce from its garden, produce it grows for the Cultivate Charlottesville market days in public housing communities throughout the city.

Once the walk-in is installed, Bread & Roses will offer a round of scholarships to current kitchen tenants and new food entrepreneurs who want to share their cuisine with the community.