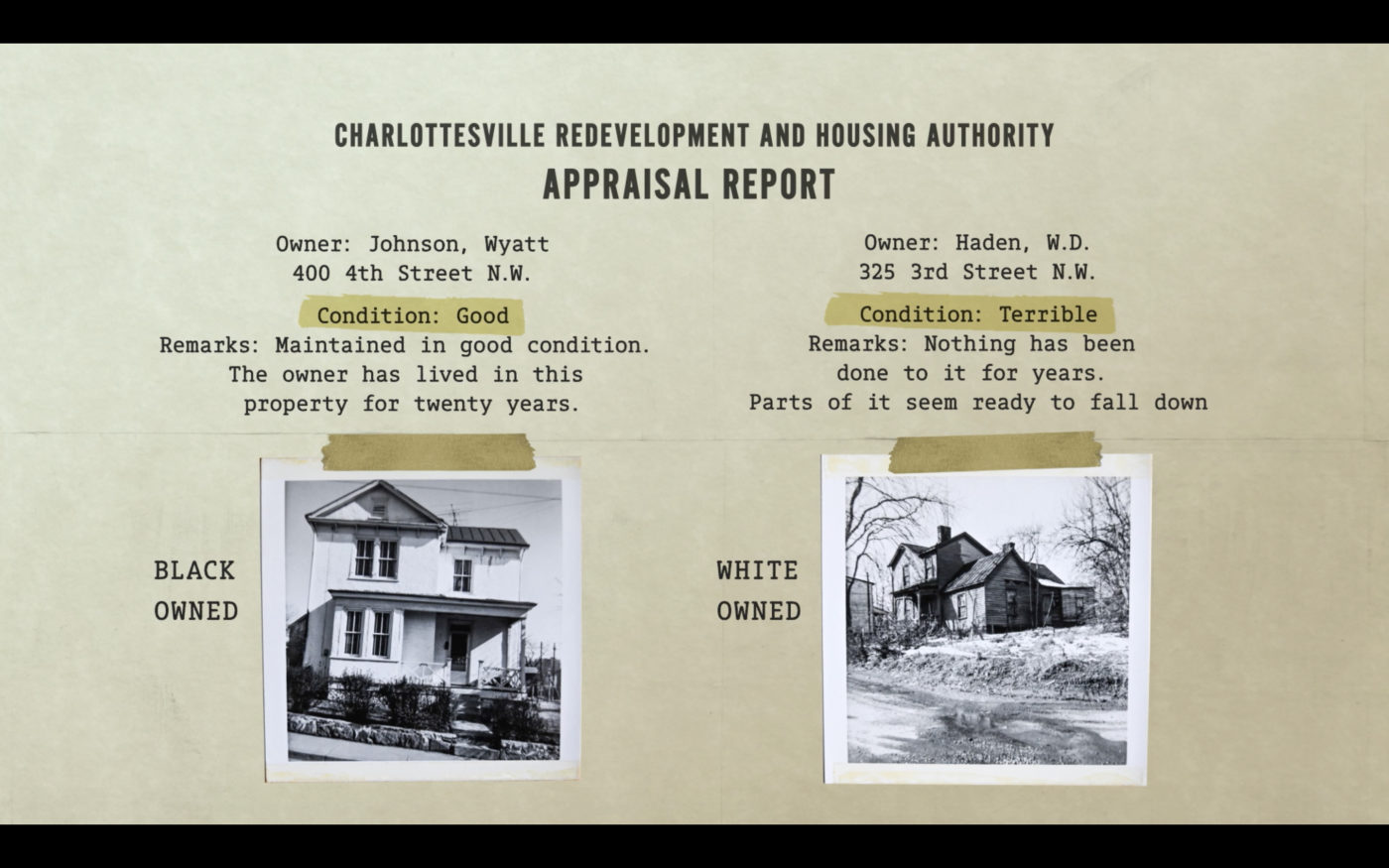 Charlottesville City property records show that many of the homes in poor condition in the Vinegar Hill neighborhood, which was destroyed by the city through the 1960s, were owned by white landlords. The “Raised/Razed” documentary tells the stories of the neighborhood before it was hit by “urban renewal.”

​​When Virginia Public Media approached local filmmaker Lorenzo Dickerson about producing a new film of his choosing for the network, Dickerson didn’t need to think over his reply.

He wanted to make a film about Vinegar Hill, and he wanted his friend and occasional collaborator, journalist Jordy Yager, to work on it with him. They already had the title: “Raised/Razed.”

Dickerson and Yager knew what most locals know about Vinegar Hill: that the City of Charlottesville razed a thriving Black neighborhood in the mid-1960s in the name of “urban renewal,” a federal program that affected hundreds of communities all over the country.

The neighborhood was located in downtown Charlottesville, roughly where the current neighborhoods of Starr Hill, North Downtown, and Ridge St. meet around the Staples and parking lot off Ridge McIntire Road.

“Raised/Raised” is about the people who lived and worked in Vinegar Hill, not just the buildings that once stood there.

The film premieres Saturday at 8 p.m. outside of the Jefferson School building, which was an all-Black school before desegregation and an important space for the Vinegar Hill community. Charlottesville Tomorrow spoke with Dickerson and Yager about what it means to understand the lives and legacies of a neighborhood that was destroyed.

This Q&A has been edited for length and clarity. 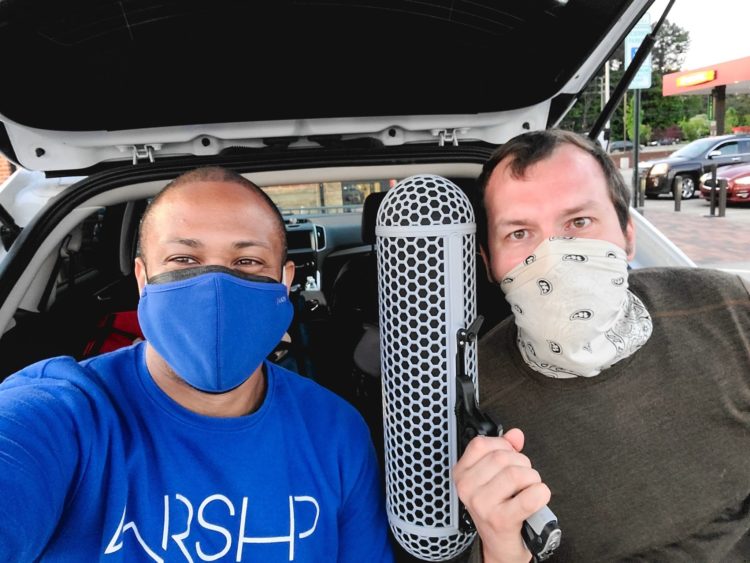 Lorenzo Dickerson (left) and Jordy Yager start their documentary film “Raised/Razed” in Durham, North Carolina, to show the connections between neighborhoods that were destroyed in the 1950s and 1960s in the name of “urban renewal.”

Erin O’Hare: When did you first hear about Vinegar Hill?

Lorenzo Dickerson: Early 1990s. My great aunt and uncle owned the first Black-owned hair care supply store in Charlottesville, which was right next to where the Inge’s building is, the building with the purple tile outside [now Grand Market on West Main St]. It was a store and a salon, and they lived on Brown Street at the time.

When I was a kid, matter of fact, we used to ride our bikes through here and then take the money from the store down to the bank — which was in the grocery store where Staples is now — to make the deposit.

My great-uncle would tell us about going to the pool hall. He said it was in Vinegar Hill, but he didn’t show us where it was. And from that point until even the last five years, I never knew exactly where it was.

Jordy Yager: I was probably in my early teens, too. My mom was talking with one of the people that she worked with about different neighborhoods in Charlottesville. Vinegar Hill was mentioned in the same breath as Gospel Hill, and I think 10th and Page was mentioned too. I cataloged it as a place, but immediately went to, in my head, the Vinegar Hill Theater [on Market St.], because that was the only thing that existed at that time that had that name on it.

What did you feel was missing from what you learned about Vinegar Hill?

Dickerson: The narrative that I’ve been hearing in recent years is about the destruction of Vinegar Hill — and that’s all I’m hearing. That pieced together with the little tidbits about going to the pool hall, or going to some particular places like Inge’s without having any additional info. I thought, “There has to be more than just the destruction. Who lived in Vinegar Hill?”

Yager: What does that narrative of destruction do when it’s the only thing that people know? It’s important to understand displacement and forced removal, what the consequences are, what the legacies are. [Vinegar Hill was] 100 years of churches and schools and businesses and benevolent societies and organizations, and generational community. Ivan Orr composed the score for the film. His mom taught at the Jefferson School. She lived directly across the street, on Fourth Street. His godsister is Kathy Johnson-Harris, who also lived in Vinegar Hill. This interwoven nature of people’s lives gets lost in that story of destruction.

Andrea Douglas [executive director of the Jefferson School African American Heritage Center] makes a clear connection that I hadn’t really put together at that time: Desegregating schools and urban renewal happened at the exact same time.

That Brown v. Board of Education decision [which ended legal school segregation] in 1954 — that’s also when the slum clearance committee gets formed in the City Council. 1954 is the first vote to authorize the Charlottesville Redevelopment and Housing Authority to raze Vinegar Hill; the second is 1960. There was massive resistance down at Lane [High School] and Venable [Elementary School] in 1958. That first integrated class of 12 students came into the school system in 1959.

All the while, what are white officials doing? Nobody on City Council is Black, so, white officials are saying, “You want to integrate into our schools? We’re going to move you somewhere else.” Four hundred and sixty three African Americans were displaced, 507 total people.

Seeing those two in relationship opened my eyes up. Nothing is in isolation; these things are deeply connected on many levels. 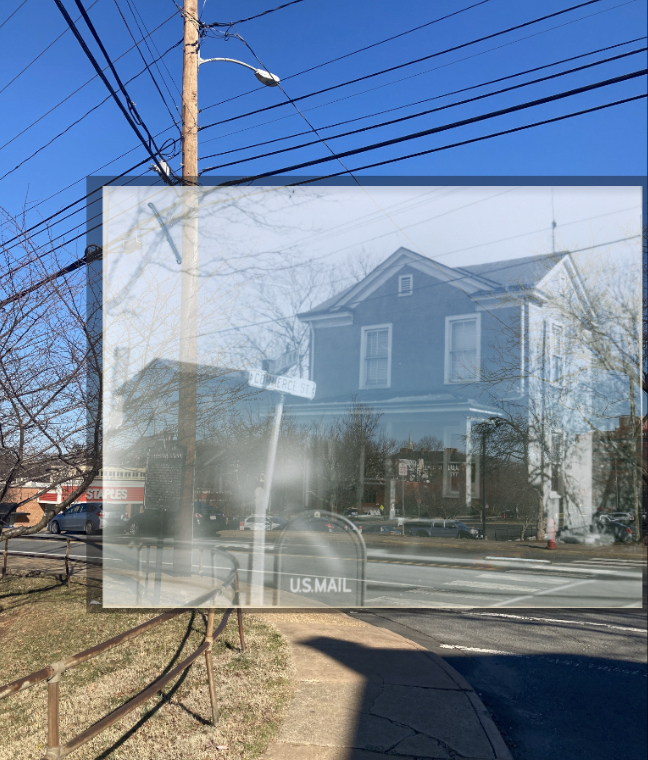 This image overlay is on the corner of Fourth Street NW and Commerce Street, looking east at a house owned by George F. Johnson. A Charlottesville neighborhood called Vinegar Hill thrived where a Staples and large parking lot sit now, until the city razed it in the 1960s.

You both grew up in Charlottesville, have done a lot of work on the area’s history and also how that history affects our present. But were there any surprises from working on the film?

Yager: Kathy Johnson-Harris has a wonderful bit in her interview where she’s talking about how her parents, who would leave the back door open — not wide open, but unlocked — would leave money on the table for the egg man, who would come in from the county. The egg man would come in, drop their eggs off, pick up the money, and then when they got home, the eggs would be there and the door would be closed. It goes to dispel that myth of Vinegar Hill as a violent place, that it was blighted. No it wasn’t. It wasn’t.

Dickerson: The sights and the sounds of the neighborhood. When Cindy Jones-Stratton is talking about what Vinegar Hill sounded like, you can really experience what Vinegar Hill sounded like, what it tasted like, the smells. Ivan [Orr] does a great job weaving the sound and the music to bring that out. Again, we go back to Kathy [Johnson-Harris], who’s talking about the rolls coming out of the oven. You can almost taste the rolls, the way she’s explaining them.

Dickerson: They talk about being with their friends as children in the neighborhood. It sounds like the wonderful place that it was for the folks that lived there.

Yager: George Ferguson Jr. was head of the NAACP — he’s a funeral home director. His family home was on Vinegar Hill, on Main Street right by the Lewis and Clark statue. And in his oral history [conducted in the 1980s for James Saunders and Renee Shackelford’s “Urban Renewal and the End of Black Culture in Charlottesville, Virginia”], he says something like, “If anybody were interested, you could go down to the courthouse. If you looked up the records of who owned properties in Vinegar Hill, you’d see that all the ones that were slummed and blighted were owned by one white man.”

We dug up those property records, and lo and behold, he is correct. We have all of the records, not only the original records of the properties but the appraisals.

What else would you like people to know about Vinegar Hill before seeing the film?

Yager: The numbers of how much was taken — and not only in terms of how many people and how much acreage of land. The year before the whole neighborhood was bulldozed, 29 businesses brought in $1.8 million in 1959 income. Adjusted for inflation, that’s more than $17.8 million today. Only a handful of those businesses were able to open up shop in another part of town. They all closed within the next five, 10 years. All of them.

And the ecosystems. People were coming in from the county and working in and frequenting Vinegar Hill, so where does all the produce in Inge’s store come from? Where do the chicks come from? Where does the fish come from? All of these stores and businesses, they touch hundreds, thousands of people’s lives and economic livability. So what is the effective impact of that?

Now, we have a nice opportunity for having a real conversation about what repair looks like. There are people still walking around today who lived there and who had things taken from them. This is a very real harm that was committed, so,what is our responsibility as a city, as a community, to try to reconcile that, to try to reckon with that?

Dickerson: That’s kind of how we end the film, with an interviewee asking, who are the folks that are responsible for this? This is a reparations issue, and don’t tell me it can’t be done, because people are still walking around here. Descendants are still here. We know who these people are.

We often think of these stories as being far away and long ago. And that’s just not truthful. These stories happened very recently.

Register for tickets for the free screening of Raised/Razed this Saturday at the Jefferson School. “Raised/Razed” will be broadcast on VPM (channel 41 in Charlottesville) on May 12 at 9 p.m. and May 15 at 5 p.m. You can also watch it at that time live streamed on the VPM website.