Charlottesville has invested $46.7 million on affordable housing since 2010 but, ‘Is that good?’ 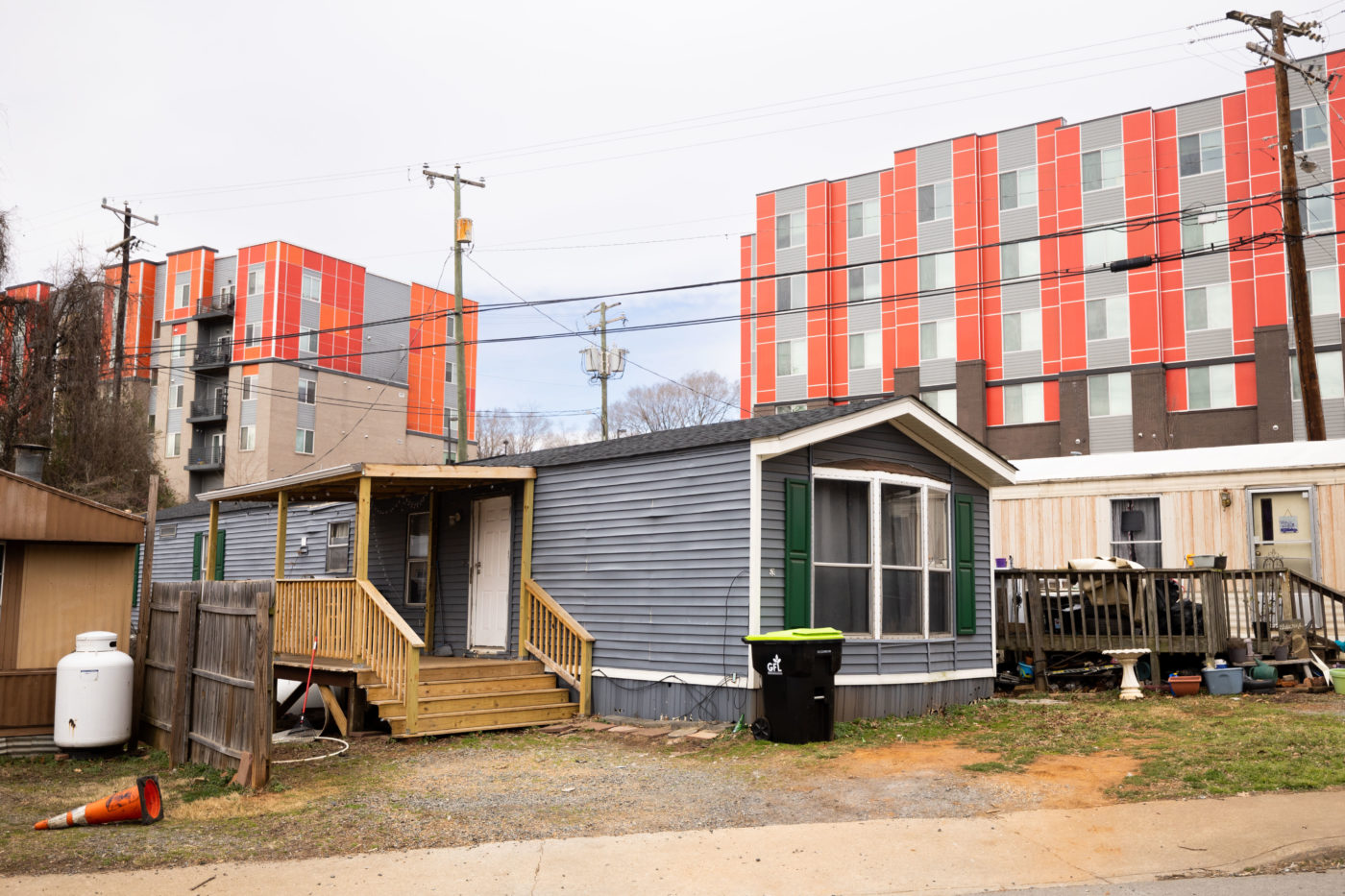 The Carlton Views apartments, a Piedmont Housing Alliance property finished in 2017 with funding from the Charlottesville Affordable Housing Fund, are across the street from the Carlton Mobile Home Park. It’s the former site of an Allied Concrete plant, where park resident Randolph Coffey used to work.

Get notified when we publish the next story

It’s time to turn Charlottesville’s plans and intentions for affordable housing into action.

That was the main message of City Council meetings on Monday, as council members and city staff took a close look at the Charlottesville Affordable Housing Fund — what it has accomplished in 10 years and what needs to be done to ensure that the money in the fund has maximum effect going forward.

Deputy City Manager for Operations Sam Sanders gave an impassioned overview during a public work session that started at 4 p.m.

Since 2010, the city has invested $46.7 million in a variety of affordable housing initiatives, according to a report the city commissioned from real estate and economic development advisory firm HR&A Advisors.

Most of that $46.7 million has come through the Charlottesville Affordable Housing Fund (CAHF), one of a few financial buckets of the Capital Improvement Projects (CIP) fund that spends taxpayer dollars on infrastructure such as buildings and roads.

That sum has helped preserve and construct 1,611 units of affordable housing while serving an additional 640 households through other housing-related services.

“The question you should be asking is, ‘Is that good’?” Sanders said to council members. “The answer is yes. But good is relative. Especially because you will never spend enough on affordable housing. Most communities have found that around this country. And because the markets are constantly changing, there is always a need to do a little bit more, a little bit more, and a little bit more.”

Charlottesville needs more, said Sanders. Since joining the city manager’s office in July 2021, he’s served as de-facto housing coordinator (one of the many positions open in city hall for over a year), and he’s seen the need firsthand, particularly where Charlottesville’s unhoused, zero-income residents are concerned.

According to the U.S. Census Bureau data cited in the Affordable Housing Plan adopted by Council last year, Charlottesville’s population is growing faster than there are places to live, due in part to zoning regulations that restrict density. This has made housing more expensive.

Wages have not risen at the same rate as living costs, and more than 2,700 of the city’s renters pay more than half of their income on rent and utilities. The majority of these households earn less than $35,000 per year. Low wages and expensive housing together are forcing low-income residents from the city.

Sanders outlined what the city needs to do to ensure that the CAHF has maximum effect for its citizens, including:

A 1,000 square-foot apartment in Charlottesville costs about as much as an apartment of the same size in Las Vegas and New Orleans, two much larger cities, the deputy city manager noted in his presentation. Sanders said that it’s crucial to know if this counts as affordable or not.

“One thing that has never been that great in Charlottesville or Albemarle is, there are no places for people like me,” said Angela Durrer, who works decorating cakes in a deli bakery. “I don’t make that much money in a year, and even still, affordable housing over there, there is none.” Read more about the experiences of people who struggle or can’t afford to live here.

Sanders made a variety of other recommendations, including that the city improve its working relationship with its funded partners like Piedmont Housing Alliance and the Charlottesville Redevelopment and Housing Authority (CRHA), and that it pay closer attention to the projects it chooses to help fund via the CAHF in order to maximize federal funding from HUD. (Affordable housing projects are typically funded via a variety of sources, not just the CAHF or HUD.)

Occasionally, the city has to repurpose HUD funding from one local project to another, and that takes time, energy, and ultimately, money, said Sanders.

Sometimes that money can’t be moved from one project to another. In the past year, the city had to return $15,000 to HUD when a project’s affordability period (how long the homes are affordable to people at a specific income level) didn’t comply with HUD’s standards, Erik Atak, grants coordinator for the city’s Neighborhood Development Services office told Charlottesville Tomorrow.

That’s a somewhat rare occurrence — it’s happened once in five years — but Sanders said that going forward, the city should do everything it can to avoid returning grant money to the government.

He also urged the Council to make a decision on its future commitments to the CAHF. The Affordable Housing Plan recommends Council pledge $10 million per year, for the next 10 years, to the CAHF. Sanders wants to know: Is that a commitment, or a goal?

“If you look at it as a goal, you may or may not hit it. If you really, really consider it a commitment, that means it is non-negotiable. It would also suggest that if you hit that number, then you’re done,” he said.

Some community members say that $10 million per year for 10 years is not enough, and Sanders said he agrees with them — even $20 million wouldn’t be enough. “That’s how much of a crisis we already face in our community,” Sanders said.

Councilor Michael Payne said he wants to commit, while Mayor Lloyd Snook favors calling it a “strongly held goal,” arguing that financial commitments from the city need to be flexible. 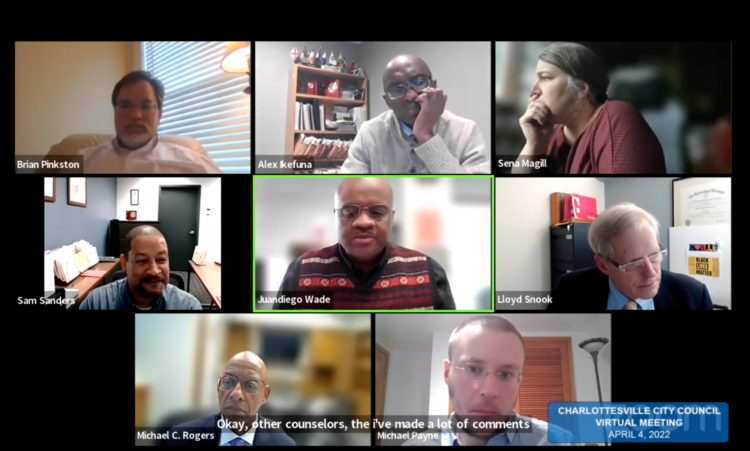 City Council met virtually on April 4, 2022 in a work session about budgeting for housing. Sam Sanders, Deputy City Manager for Operations, said, “We’re doing good things. But we could do better.”

Credit: Screenshot taken during the meeting

The city has a lot of work to do on its affordable housing program, but Sanders said there are things to celebrate.

The HR&A report showed that “Charlottesville is punching above its weight class,” he told Council. $46.7 million over the past 10 years, and the possible $10 million per year over the next 10 years, is more than Charlottesville’s peer cities are investing by comparison.

What’s more, the report showed that the money is reaching the households most in need, Sanders said.

“We’re doing good things,” Sanders said. “But we could do better.”

Here’s one thing CRHA has done that affects affordability but not the city’s budget: They unanimously voted to issue up to $23 million in revenue bonds to the new owner of Midway Manor, who has pledged to maintain the long-term affordability of the building’s 98 units.

Later in the evening, council members voted unanimously to amend and re-enact the Housing Advisory Committee (HAC), anl advisory body. Its purpose, as defined on the city website, is to provide “City Council with recommendations regarding affordable housing policy and affordable housing funding priorities.” The committee is expected to look into state and national housing trends and ideas and propose to Council how Charlottesville might benefit from, and even implement, some of those ideas.

The vote reduced the HAC membership from 21 to 11, with a city councilor serving as a non-voting twelfth member, and promised to reserve one of those 11 seats for a representative from the Charlottesville Redevelopment and Housing Authority.

During the final community matters comment portion of the meeting, Shelby Edwards, executive director of the Public Housing Association of Residents, told Council that she hoped PHAR would continue to have a spot on the HAC, as it has in recent years.

Allocations for 2021/2022 are already being considered, though. Interim Director of the Office of Community Solutions, Alex Ikefuna, presented the numbers to Council Monday night, including improvements to public housing and grants to large nonprofit organizations:

Council is expected to vote on these allocations during its April 18 meeting. Sign up to watch the meeting (and make a public comment) on the city’s website; the meeting link and agenda will be posted a few days in advance.

Sanders promised to post a list of decision points for Council on the city website — “serious decision points,” he called them, adding that even after Council makes those decisions, there’s “lots of work ahead, and many, many next steps.”