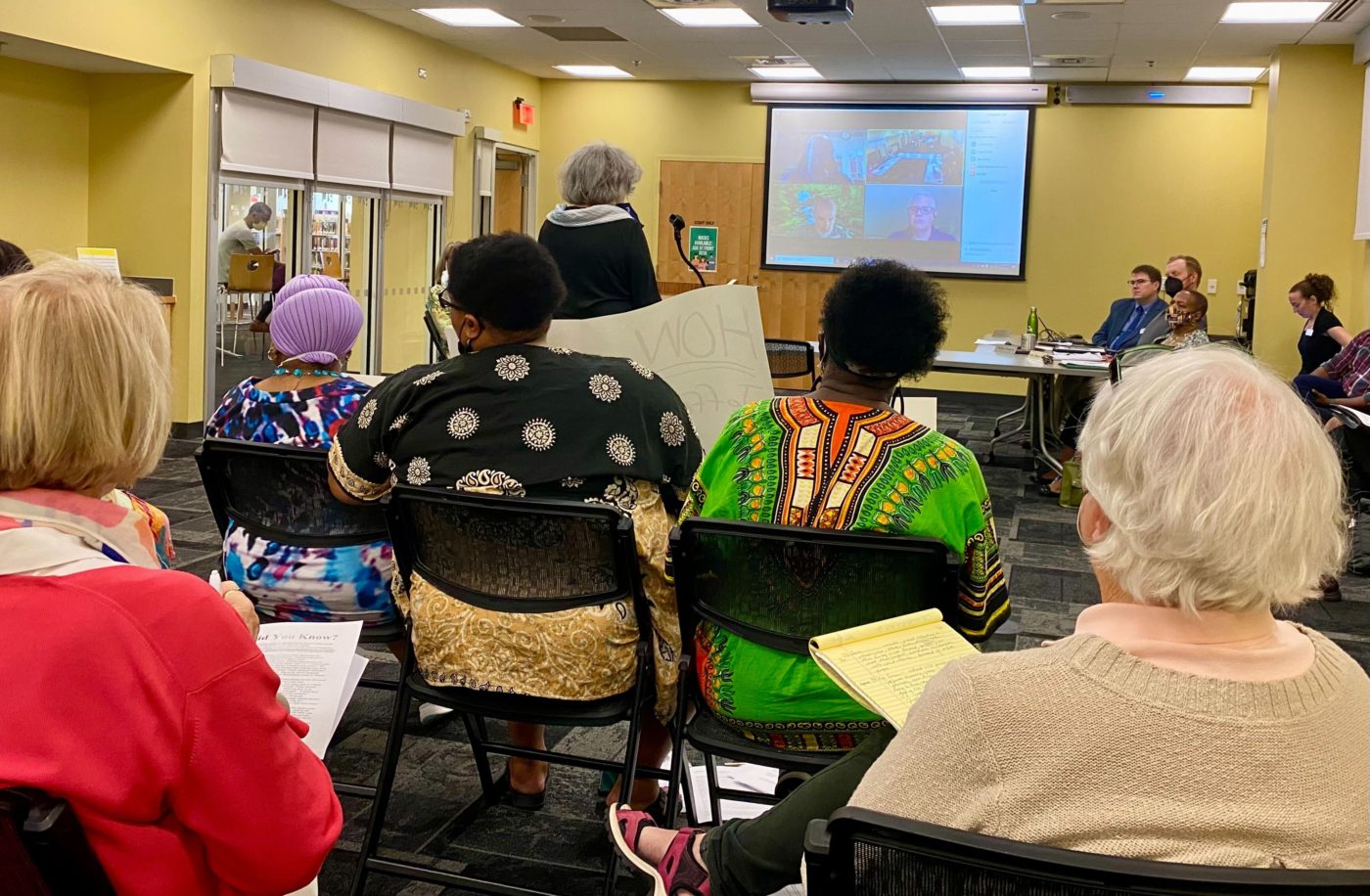 Advocates for and against changing the name of the Jefferson Madison Regional Library gave impassioned comments during the June 27, 2022 meeting at Northside Library in Charlottesville.

In a tense and polarizing meeting Monday afternoon, the board of trustees for the Jefferson Madison Regional Library (JMRL) heard from community members about changing the library system’s name.

The battle to change the name began last month with a request from an organization called Reclaimed Roots Descendants Alliance, which was created for Charlottesville-area descendents of enslaved people. The group said the library should not be named for historical figures who owned enslaved people, including Thomas Jefferson.

“Other people will speak up about his greatness all day,” said Myra Anderson, director of Reclaimed Root. “The time has come to stop honoring the ugly legacy of racism and bigotry.”

More than 20 community members came to speak at the meeting, and more called in. Thirteen people, all of whom are white, protested the name change. Many of them carried fliers about Jefferson’s opposition to slavery, which Daily Progress reporter Katherine Knott shared on Twitter.

At the @J_MRL meeting, one attendee handed this information out. pic.twitter.com/82OU79joF7

Six of the nine people who wanted the library system to change its name sat in the front row, some wearing dashikis, African tribal-themed apparel. They all held signs that read, “Change the name,” “JMRL do the right thing now” and, “White supremacists were never inclusive.” Supporters of the name change included white and Black community members.

Some speakers said that Jefferson’s enslavement of people should not result in the removal of his name. His legacy and his role in creating the Declaration of Independence is what should be honored, they said.

“The enemies of Jefferson may not realize that they would have no rights at all if his ideas are discarded and his name is taken away,” said Ann McLean, who lives in Richmond.

Other speakers said that Jefferson inherited 30 enslaved people from his father and was bound by law and societal pressures at the time to continue slave ownership.

“Yes, Thomas Jefferson owned slaves, he inherited them from his father. At the time, it was illegal to free slaves,” said Robert Turner, former law professor at University of Virginia.

Jefferson freed seven of the more than 600 people he enslaved during his lifetime. Owning those people and his large property at Monticello made him and his family very wealthy. When he inherited 30 enslaved people from his father in 1764, at age 21, the Virginia colony allowed enslaved people to be freed only by special acts of the legislature. The United States declared its independence from Britain in 1776 and six years later, the Virginia legislature passed a law expressly allowing enslavers to free the people they have held as property. In the decades that followed, the General Assembly passed a variety of laws around freeing enslaved people and the rights of freed Black people.

One speaker at Monday’s meeting suggested those who are offended by the names should move away.

“You live in Charlottesville, home of one of our two preeminent founding fathers. Deal with it,” said Tom Neale, who lives in Baltimore. Some people in attendance applauded.

Supporters of the name change said that vindicating the Jefferson and Madison names does not uphold the library system’s values. The JMRL mission and values statement reads, in part, “ We appreciate diversity and are mindful of the culture and history of our organization, our region, and our communities. Our libraries are inclusive spaces for people of all backgrounds, where everyone is welcomed and respected.”

“In reality, a lot of what Jefferson did, his words and actions towards his enslaved community, is directly the opposite of, ‘We appreciate diversity, a mindful culture. We embrace and amplify voices,’” said Anderson, of Reclaimed Roots. “He did not amplify the voices of his enslaved people.”

Laura Sirgany, a parent of a Charlottesville City Schools student, expressed her concern for the Black and brown students who may feel targeted by the legacy of Jefferson and Madison.

“This is not about preserving or erasing history,” she said. “It is about acknowledging it. I can tell you that the Black and brown youth of this community suffer the trauma of the legacy of the people whose names are borne out on this library system. They tell me, ‘I feel targeted. I don’t feel welcome. I don’t feel like my identity is honored or that my history is being honored.’”

JMRL Board of Trustees member Lisa Woolfork said she doesn’t see the relevance of preserving a name for the sake of one man’s legacy. To frame the issue as about Thomas Jefferson instead of members of the community is “appalling,” she said.

“If we are a library for the public, we need to live into the values that will help us achieve a more welcoming community,” Woolfork said.

Other trustees teetered between the two sides, suggesting the difficulties of choosing one over the other.

Wendy Wheaton Craig, vice president of the system and the Louisa County representative, expressed her indecision. Trustee Michael Powers suggested adding additional information that elaborates on Jefferson’s past, including his slave ownership, in some of the libraries.

“There is no magic bullet for everyone,” said Powers. To be inclusive to some will result in being exclusive to others, he said.

The soonest the board may vote on a name change is next month’s meeting, said Thomas Unsworth, who is the current president of the board of trustees. Though, it will likely take longer. The next meeting date will be set by JMRL’s next president, Tony Townsend of Albemarle County, and will be posted to its website.

JMRL serves the city of Charlottesville and Albemarle, Louisa, Greene and Nelson counties. Each jurisdiction provides funding for the eight libraries.

“This is obviously a tricky subject with the responses we’ve had already from a couple of funding jurisdictions,” Unsworth said.

The current contract the library system has with those jurisdictions does not allow the board to change the name. To make that change, the board would have to amend and ratify its contract. Two of the funding jurisdictions, Louisa and Greene counties, have already passed resolutions in opposition to the name change.

Duane Adams, a supervisor for Louisa County, threatened to withdraw funding from JMRL if it changes the name, The Central Virginian reported in May. Lousia County currently provides $392,000 of the library’s $8.2 million budget, according to its 2023 proposed budget.

Adams did not immediately return Charlottesville Tomorrow’s request for comment. He, along with Greene County representative James West, did not attend Monday’s meeting.

Adams is also running for state senate next year.

Should JMRL change its name, they would not be the first regional or local institution to do so in recent years. The Blue Ridge Health District dropped Jefferson from its name in 2020. Jefferson’s birthday is no longer a paid holiday for city workers. Albemarle County’s Mountain View Elementary School was renamed in 2020 from Cale Elementary School, when community members discovered that Superintendent Paul H. Cale made racist statements in his writing in the 1950s.

Written by:
Tamica Jean-Charles
@thisistamica
tjeancharles@cvilletomorrow.org
I'm Charlottesville Tomorrow's education and families reporter. Reach out to me by email or on Twitter. Also, subscribe to our newsletter! C’mon, it’s free.