In the Charlottesville area, the rich are getting richer, while the poor are getting pushed out 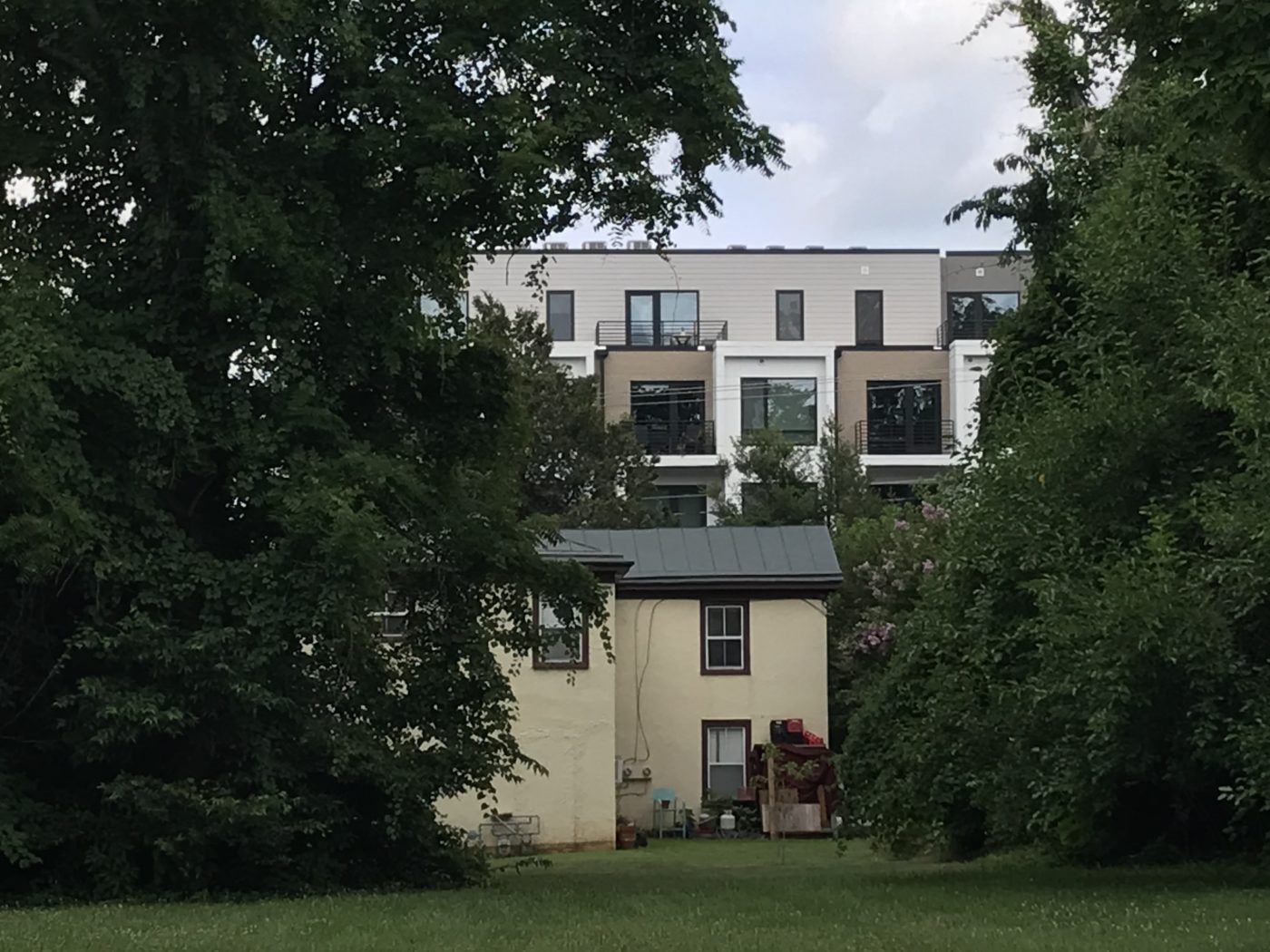 The newly-built 10th & Dairy Apartments dwarf a century-old two-story home just across the street in the 10th & Page neighborhood. At the 10th & Dairy apartments, one- and two-bedroom apartments start at $1,817 and $2,429 per month.

Priscilla Anderson has been on the waitlist for federal housing assistance multiple times. Enough times that, at the moment, she can’t remember if she’s currently on the waitlist, or if she needs to reapply when it opens again — which it does for a brief window of time just once or twice each year.

Anderson lives on a fixed income that supports her and her granddaughter. But everything from gas to a loaf of bread costs more now, and her income hasn’t gone up. Anderson’s landlord also raised her rent by $100 per month.

Anderson is one of hundreds of people currently on housing subsidy waitlists maintained by the Charlottesville Redevelopment and Housing Authority and Albemarle County Office of Housing. And that list is about to get a lot longer.

Because of an extraordinary hike in how much money high earners in the Charlottesville area make, more people will be eligible for these already-limited housing assistance resources.

Who gets vouchers or access to public housing is tied to a statistic called area median income, or AMI, which the U.S. Office of Housing and Urban Development (HUD) calculates annually. To qualify, a household cannot make more than a certain percent of that number.

It is the largest increase in the past decade, which suggests that the City of Charlottesville, Albemarle, Fluvanna, Greene and Nelson counties as a whole are getting wealthier — a lot wealthier.

But it also means that lower income members of the community have been — and will continue to be — pushed out.

The significance of the AMI calculation is “huge,” said Charlottesville Planning Commission Chair Lyle Solla-Yates. It’s used in policies all over the place.

At the federal and state levels, HUD uses AMI to determine who is eligible for housing assistance programs, including housing choice vouchers — like the one Anderson hopes to get — and public housing. These programs are already so under-resourced that they cannot meet community demand, and an increase in AMI means more people will qualify.

Tenants who are already receiving federal housing assistance will likely be able to remain in their homes, situations unchanged.

But people who qualify for and haven’t yet received that assistance, like Anderson, will now likely have to compete with even more people — and wait even longer.

Read more about voucher programs and how they work locally.

Anderson worries she and her granddaughter might never get assistance.

“It is very discouraging, to have to go through this hardship right now, not knowing when you might get something,” she said. “It’s very stressful.”

But Anderson knows from experience that even if she gets on the housing assistance waitlist, and even if she receives a rent subsidy, she’s not guaranteed housing. She received a voucher once and had 60 days to find a place that she could afford and that would accept the voucher. She couldn’t find an apartment that fit the rules and had to forfeit it.

Anderson said she can’t afford to stay in Charlottesville with housing prices the way they are, but she doesn’t want to uproot her granddaughter who attends Charlottesville High School.

But her situation isn’t likely to improve. The increase in AMI could also allow low-income housing developers to increase rents, while still maintaining their federal tax credits.

Locally, both Charlottesville and Albemarle County use AMI in housing policy, such as Charlottesville’s ongoing zoning ordinance rewrite and Albemarle County’s Housing Albemarle policy. With AMI rising so quickly, officials will have to consider things like whether approving a 50-unit building with five apartments available to households at 60% AMI will actually help people like Anderson find housing. They could decide to institute more aggressive affordability requirements for new developments. 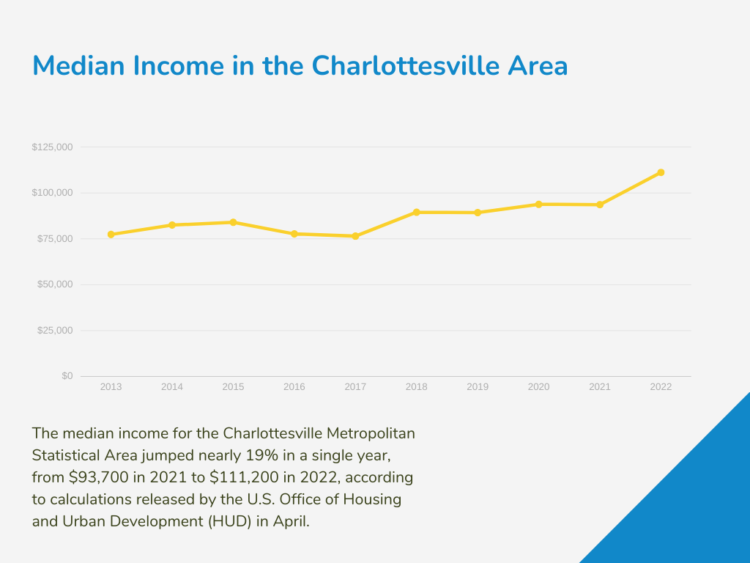 Experts say there are a few possible reasons.

A spokesperson from HUD told Charlottesville Tomorrow that the increase is driven by a strong economy in 2019 (the year HUD used for its calculations) and by accelerated inflation in 2021.

Olsen, the UVA economist who studies low-income housing policy and poverty alleviation says he is hearing that, in general, prices have recently been going up faster than salaries.

It’s also possible that the Charlottesville area has seen an increase in jobs with fast-rising wage rates, that “we just happen to have a mix of working types whose earnings are going up fast,” said Olsen. Olsen also speculates that during the pandemic, remote workers with high-earning, big-city jobs moved to the Charlottesville area.

He said he is confident that all incomes are going up, “but they’ve been going up fastest at the upper wage end.”

Charlottesville Planning Commission Chair Solla-Yates says people who make less money are being forced to leave. “My understanding (I have not seen hard data) is not that existing residents are seeing huge material improvements in their income, but that they are being displaced by people with significantly more resources,” he wrote in an email to Charlottesville Tomorrow.

Mathon hopes that policymakers and housing sector officials remember that even though AMI can be a helpful tool for developing programs, policies, and more, it is an imperfect measure with a major flaw: “It becomes data. It’s not about human beings.”

Anderson and her granddaughter want to stay in their home, in their community amongst friends and family, but likely won’t be able to afford it.

“We need to get a good program out here,” said Anderson. “Something you can lean on for some help.”