Many people are asking for Charlottesville transit to run more and go electric — but first, the city needs more bus drivers 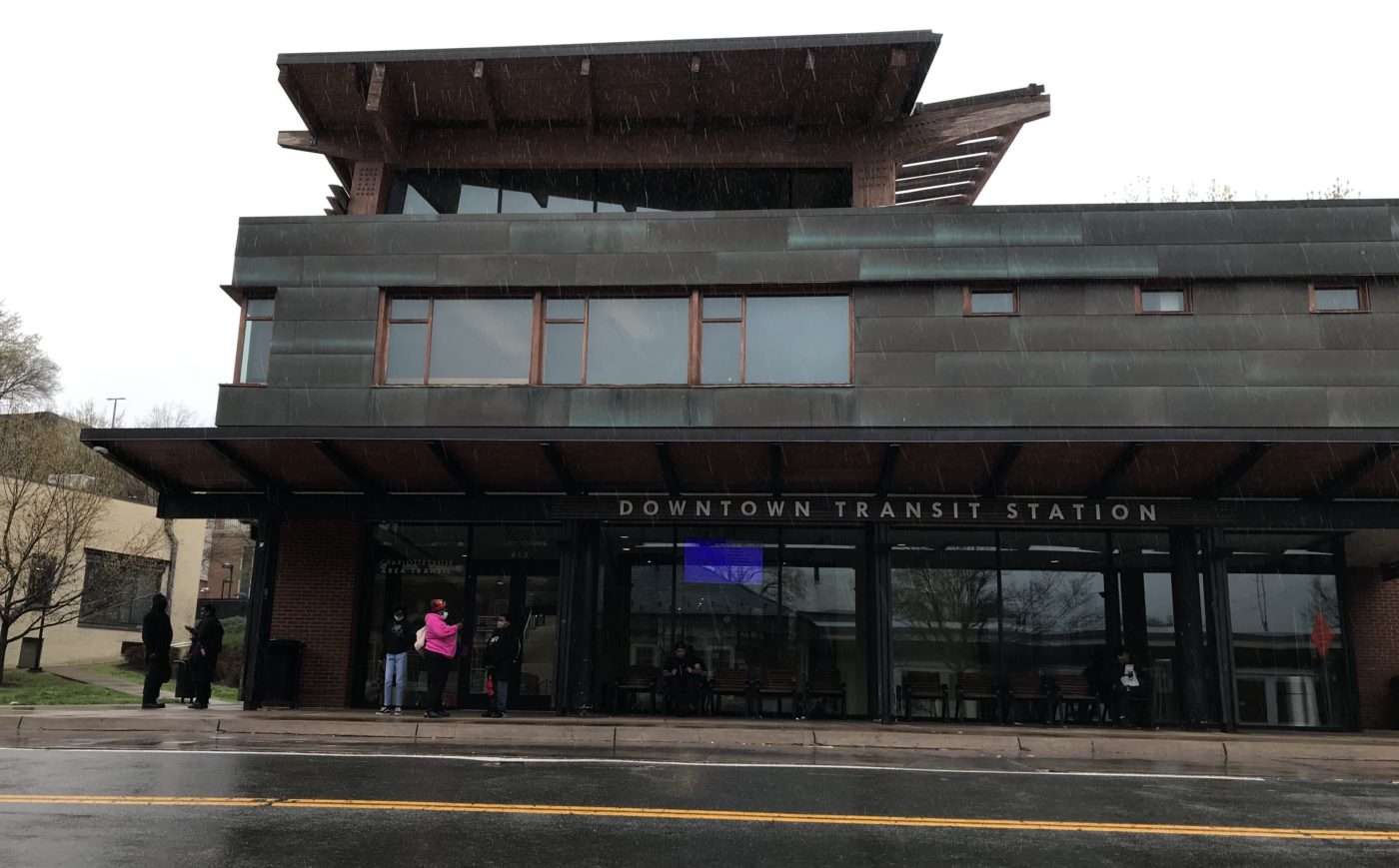 In AprilMarch 2022, riders waited upwards of 45 minutes for buses that weren’t arriving on time in Charlottesville. The delays, caused in part by a shortage of bus drivers, mean missed connections and being late to work and appointments for riders.

Looking for more about transportation?

Like most public transportation agencies across the U.S., Charlottesville Area Transit has a bus driver shortage, and it’s affecting riders’ ability to get where they need to be, and get there on time.

Where the buses are — and aren’t — is the main topic of conversation at the transit center, located on Water Street near one end of the Downtown Mall.

Around noon one warm weekday in March, a man wearing a tie-dye shirt and a cast on his left foot, a yellow bandana tied around his long hair, sat on an outdoor bench in the cool shade of the transit center’s overhang. He looked up CAT bus routes on his phone while his companion, who sat in her rollator’s fold-down seat, called a clinic to inquire about walk-in appointments.

“They’re always late,” he said. (He preferred not to give his name.) He and his companion were trying to catch the 2 bus so that they could transfer to the 3, in order to get home to Belmont. If the 2 is even a little late — and that day, it was a lot late — they’d miss the 3 and have to wait for the next one.

“It’s affecting people, badly,” he said as he and his companion got on the tardy 2, about 45 minutes after the scheduled time.

Another passenger, Lever — “like the soap,” he explained later — said out loud to no one in particular that the buses are always late nowadays, and they’re always late because of a driver shortage. The shortage, he’d heard, “is because of the virus.”

Lever arrived from his shift at The Nook ready to wait, carrying a Bluetooth speaker playing Al Green in one hand and a plastic cup of lemonade in the other. And while Lever was right about one reason for the shortage, the COVID-19 pandemic is just the tip of the transit driver shortage iceberg.

Public transportation ridership in Charlottesville and throughout the country plummeted when the COVID-19 pandemic hit the U.S. in early 2020. People who started working from home were no longer commuting, or they drove if they could to avoid being in close contact with strangers.

Service didn’t shut down completely, though, because for some people, public transportation is their only means of transportation, period — it’s how they get to and from work, the grocery store, the pharmacy, the doctor and everywhere.

But some drivers left the profession because COVID-19 made it risky. Some retired early — the transit operator workforce is older than the average worker, said Chris Van Eyken. He’s a program manager with TransitCenter, a national nonprofit public transportation advocacy organization.

Over the past few months, people have started to return to offices, eating in restaurants, concerts and more, and CAT ridership and route service has begun to increase, although slowly, said Kyle Ervin, CAT’s marketing coordinator.

Currently, CAT is “operating at 79% of its proposed service model,” said Ervin. Getting back to 100% normal service isn’t possible without bus drivers — and CAT is struggling to recruit them.

Ervin didn’t provide an exact number of drivers CAT wants to hire, but he gave an idea of how dire the situation is in a text message: “All in all, we simply need MORE DRIVERS! We’ll take all the applicants we can get!”

The bus driver shortage has also affected school buses around the country. Here’s more about what that’s meant for Charlottesville students.

Matthew Ray is a lifelong Charlottesville resident and CAT driver of more than 8 years. By his count, the agency needed a minimum of 55 drivers to keep all 13 routes running before the pandemic. Currently, he said, CAT has fewer than 50 drivers. They are now running 12 of those routes, all but the 12 (Seminole Trail).

Ray loves his job — he’s proud to be a city employee and feels good about serving his community by helping people get where they need to go, safely and on time. He likes interacting with people all day long, and enjoys being able to look out for regular riders.

Before driving a bus, he drove a limousine, and prior to that, a truck. “It’s in my blood,” he said. “Being short is distressing, to constantly have buses that are pulled off the road because they don’t work, or because there’s no driver.”

One day this past week, Ray ran route 7 (Seminole Trail/Emmet Street), and instead of three buses running that route, there were just two. Some of the passengers waited for 45 minutes for their bus, and the bus driver — Ray — was the first person to hear their exasperation about being late. When he stepped off his bus at night, he was exhausted.

Just as draining, he said, is hearing folks wish that CAT would add electric buses to its fleet, reduce route times to 30 or even 15 minutes. Those things would be great, he said, but it’s hard to think about them when the agency is struggling to recruit and maintain drivers.

Three recent recruits all left in a short period of time, Ray said. One, a former New York City driver, took a pay cut to wash instead of drive buses because the stress that came with running reduced routes was too much. Another went over to UVA’s University Transit System, which pays more.

“We’re at the bottom of the barrel, the way I’m seeing it,” Ray said. “Morale is pretty low.” 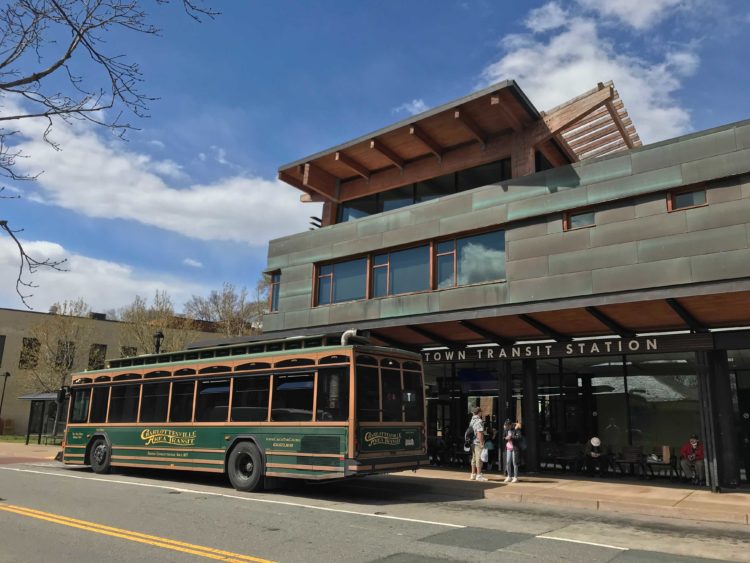 Where the buses are — and aren’t — is the main topic of conversation at the transit center, located on Water Street near one end of the Downtown Mall in April 2022. A bus driver shortage has caused delays and cancellations in Charlottesville transit.

That’s why Ray has been working with other city employees on a collective bargaining agreement with the city — he wants better working conditions and more rights for himself, his colleagues and his department head.

Want to know more about collective bargaining? Subscribe to our free newsletter to get upcoming reports.

If CAT wants to improve its service, it has to hire more drivers, and the city needs to make driving a bus a better job, Ray said.

Working conditions, said Van Eyken, is in fact “the biggest concern for agencies right now. The job of bus driver is not as attractive as it once was. It still pays decent compared to other jobs, especially jobs for non-college educated folks, but it’s just not keeping up with the cost of living, for one.”

Van Eyken says drivers worry about their physical safety — Smart Cities Dive reported last year on assaults that have happened around the country. Drivers also struggle with schedules that cut into personal and family time, he said. It’s a sedentary job where it’s hard to take food and bathroom breaks, which puts drivers at higher risk for chronic illness like diabetes and heart disease.

The job postings for CAT bus operators show that the agency is doing a few things to make the job better: Both the full- and part-time jobs come with $2,400 signing bonuses; employer-paid health insurance options; paid holidays, vacation, and sick leave; and gym membership reimbursement; continuing education and training opportunities; and retirement options.

Ray said it’s not bad pay, but it’s not great. The city recently approved a 6% mid-year pay increase for CAT operators; 12 drivers now make $20 or more an hour. Before, just two of them did, Ervin said.

One of those two drivers is a 35-year employee who also has a second job, said Ray.

“How has he been there for 35 years and hadn’t risen to the top?,” Ray asked.

Ervin said that CAT is attending local job fairs frequently and will soon mount a hiring campaign. The agency knows there are problems with its service — on CAT’s website and Twitter account, the agency posts multiple service alerts about delayed and canceled routes almost daily.

Once CAT hires more drivers, Ervin hopes they can start working on its other goals, like expanding its fleet and adding new routes. The automatic passenger counters recently installed in each bus will give CAT a more accurate rider count which, Ervin hopes, will result in more funding.

CAT is funded by Albemarle County, the City of Charlottesville and the University of Virginia, in addition to federal and state grants. A recent $1.06 million award from the Commonwealth Transportation Board ensures that CAT service will be free for anyone to ride until June 30, 2026. Ervin said the agency hopes it will stay free even longer.

Free or not, riders have places to go.

It’s frustrating, Lever said. But he has started to build a little more time into his morning commute rather than pay close attention to the delays and cancellations.

“It’s free,” he said with a shrug, taking a sip of his lemonade. “I can’t complain.”

But still, plenty of people do. Ray, the bus driver, understands why.