Commentary/Opinion: Charlottesville’s proposed Land Use Map is first step toward remedying the past

On occasion, Charlottesville Tomorrow will publish opinion pieces by members of our local community. At this time, we can acknowledge receipt and inform you whether a period for accepting them for publication is open.  We cannot guarantee that a submission will run. Letters must include the writer's full name. Anonymous opinions and those signed with pseudonyms will not be considered. Commentary on an article should be submitted within one week of a story's publication. For verification, opinions and commentary also must include the writer's contact information. Writers should disclose personal or financial interest in topics addressed. Pieces are edited for clarity and fact checked. Writers and/or organizations may only submit one piece over a 30-day period. We do not endorse political candidates, but candidates and supporters are welcome to make one submission before a primary election/convention and again before the general election. Candidates and anyone wishing to write about a candidate must submit their pieces no later than 45 days before Election Day. Political pieces will not be run within 30 days of the general election election. For more information, please reach out to us using our contact form >.

I am a lifelong resident of Charlottesville who grew up in the Vinegar Hill neighborhood before it was destroyed. I have been disappointed in recent weeks by reactions from Charlottesville residents to the proposed land use map. These reactions include Ruth Barolsky’s June 1, 2021, letter to the editor of The Daily Progress, which likened current proposals to allow affordable housing in historically exclusionary neighborhoods to the razing of my childhood home, as well as a joint statement of predominately white Charlottesville neighborhood associations and a flyer that was distributed throughout the Venable neighborhood. All of these communications were put out by community members who profess a commitment to equity, inclusion, and the importance of affordable housing. But in all cases, the commitment stops if it might mean welcoming new neighbors to the writer’s back yard.

Let’s start with some local history. For decades before its disgraceful destruction, Vinegar Hill was a thriving Black community, with many owner-occupied homes and Black-owned businesses. It was a great place to live. The city of Charlottesville paved over Vinegar Hill because it did not want my community to get in the way of their plans to redevelop downtown. As a result, many residents of Vinegar Hill, including my family, were displaced from the homes that most families owned to the public housing development at Hardy Drive, which was built around the same time. Many descendants still live in public housing today, without the intergenerational wealth that would have been theirs had their family homes not been destroyed.

I have seen the displacement of Black Charlottesvillians continue throughout my adult life in more subtle ways. Increasingly, as rising property taxes force Black families out of their homes in historically Black neighborhoods, such as Fifeville and 10th and Page, white families move in. As housing prices rise throughout Charlottesville and affordable housing remains in short supply, Charlottesville is in danger of losing its Black community entirely.

It is well known that single-family zoning is a tool of segregation. (Rothstein, Richard. The Color of Law. Liveright Publishing Corporation, 2018, p. 52). Land use, zoning and urban planning policies have long been used by white officials here to try and control where and how Black residents live and work. In 1893, as the first generation of Black families came out of Reconstruction amassing land and real estate, a group of private white developers inserted racist covenants into 140 properties in Locust Grove, preventing Black neighbors from buying them. Over the next 75 years, these covenants were inserted into thousands of properties throughout Charlottesville and Albemarle County.

In 1912, the City Council followed Richmond and Baltimore — as meticulously detailed by Karen Waters-Wicks in the Magazine of Albemarle County History — and passed a citywide racial segregation ordinance prohibiting the sale, rental and construction of housing to anyone of the opposite race in majority race blocks. Gradually the federal government declared these and other explicitly racist housing policies illegal (Buchanan v. Wharley; Shelley v. Kraemer, Civil Rights Act of 1968). But as it did, a national urban planning movement was also growing, creating other ways to discriminate against Black residents through seemingly race-neutral means.

In 1922, Robert Whitten’s Atlanta Zone Plan created zones or codes for dividing housing: R-1 was the white residence district; R-2 was the colored residence district. This, however, was challenged and not upheld in court, but in 1926, the U.S. Supreme Court (Euclid v. Ambler) opened the door for what we now know as zoning by declaring it legal to ascribe a property’s use to it through zoning code or ordinance. From here, mentions of “Single-family” use booms throughout the country, including Charlottesville and Albemarle, directly alongside racist covenants. At the center of the conversation was a planner named Harland Bartholomew, who traveled the country speaking at planning conventions on his ideas for how to prevent the “inva[sion] of Negroes [sic]” and “prevent movement into ‘finer residential districts … by colored people [sic].” (Color of Law, p. 49.) Bartholomew made a stop in Charlottesville and created the land use map for this city in 1959. The map has remained largely unchanged. 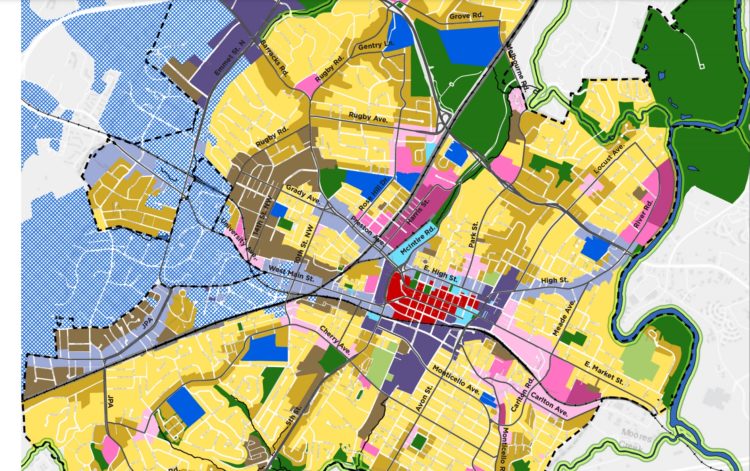 A view of the most recent (May 2021) Charlottesville draft land use plan.

The extensive use of single-family zoning in Charlottesville coupled with municipal investments of infrastructure and utilities, as well as preferential bank terms and financial loan opportunities, raising property values in these neighborhoods and creating a foundational mechanism for white families to pass wealth across generations. Now, home prices in these historically exclusionary neighborhoods have increased to an extent that, when combined with a still racially segregated and substandard-wage job market, makes it difficult for Black families to buy or rent there — excluding them through financial terms, not explicitly racist, but the history is bare.

The new proposed Land Use Map, which would allow multifamily housing to be built in neighborhoods such as Greenbrier and North Downtown, would be the first step towards rectifying Charlottesville’s history of displacing Black people. This upzoning need not, and under the current proposal does not, allow for the construction of large apartment complexes in historically exclusionary neighborhoods. “Soft density,” in the form of townhomes, duplexes and small apartment buildings is sufficient to increase affordability in these neighborhoods, and to allow members of communities that have been deliberately kept out for decades to live there. (See https://www.brookings.edu/research/gentle-density-can-save-our-neighborhoods/, accessed June 10, 2021.)

I attended the meeting that resulted in the joint neighborhood association statement. I was the only person who supported the proposed land use map. There are many white Charlottesville residents who don’t mind moving into our neighborhoods as they gentrify them, but they don’t want Black people in their neighborhoods. While it may make white residents uncomfortable to see new development in their neighborhoods, this discomfort should not be compared to the attempted of erasure of Black people from Charlottesville that I have seen over the past 50 years. If we learned anything from the awakening that began last summer after George Floyd, I hope our city can show the world that we are truly committed to equity and transformation and embrace the changes in the proposed land use and housing changes from the consultants. 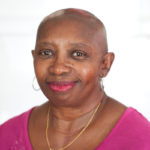 Written by:
Carmelita Wood
Carmelita Wood is a lifelong resident of Charlottesville. She grew up in the Vinegar Hill neighborhood. She has served as the president of the Fifeville Neighborhood Association and is currently a community activist for affordable housing.