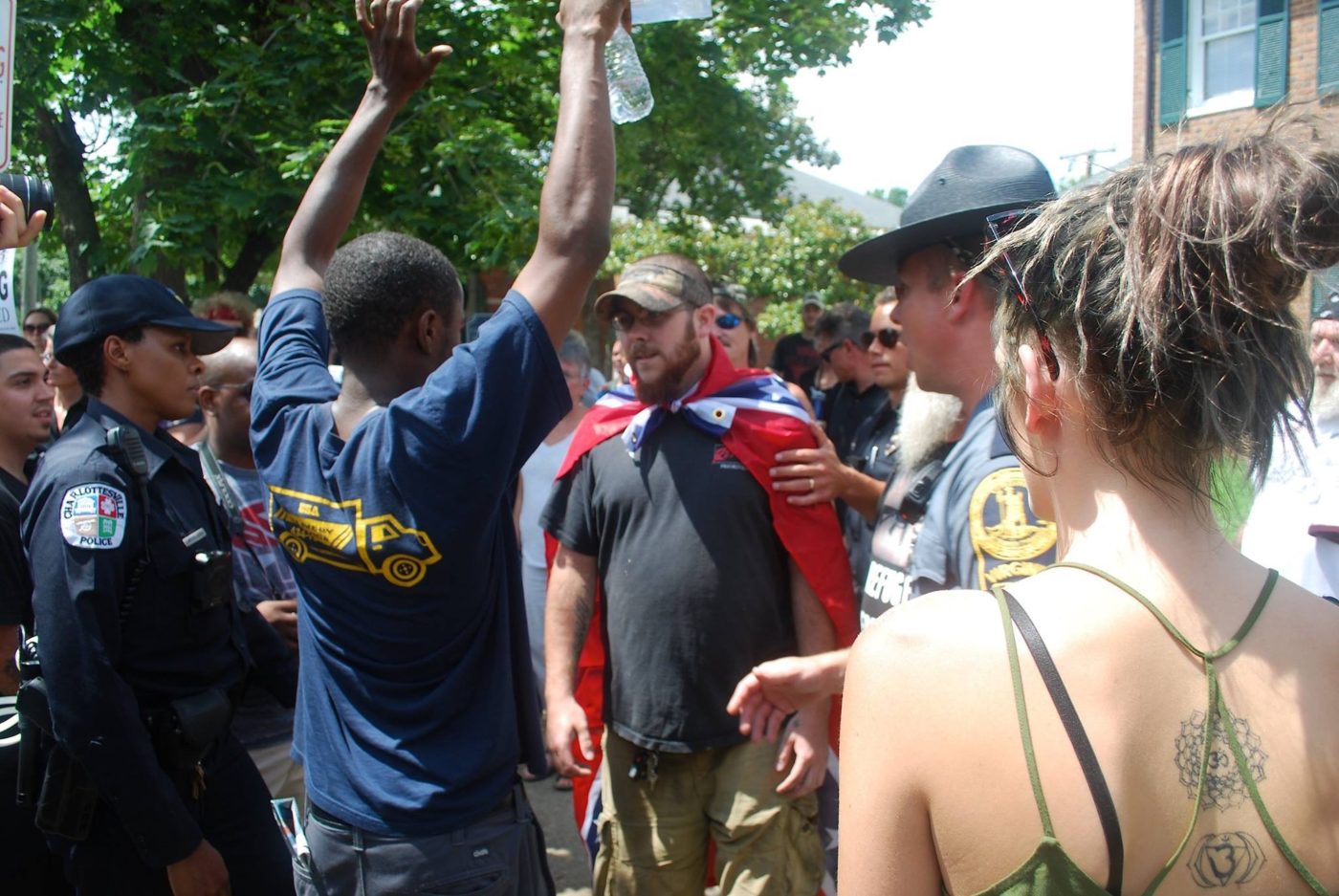 After the Ku Klux Klan rally in Charlottesville, Virginia on July 8, 2017, a friend sent Regine Wright a photograph they found on social media. Wright (the officer on the left) remembers the scene. The counter-protester asked why she was helping the KKK. “I told him that I wasn’t there for the KKK, I was there to keep him safe and out of trouble,” Wright writes.

For Charlottesville, the Unite the Right Rally was traumatizing. For me, the Ku Klux Klan rally the month before, on July 8, 2017, was equally so. It reminds me of how my time as a Charlottesville police officer was complicated by the need to live between two worlds.

I was angry and conflicted. I didn’t want to escort the KKK, but I’d worked hard to become a detective. I thought that I was placed with another unit because of my race. I wasn’t going to be hidden. After crying to my family, I expressed my discontent to my supervisors, and they moved me back to the investigations unit.

The day of the rally, I de-escalated a standoff between a Black man and a man with a confederate flag tied around his neck. The Black man raised his hands, called me a traitor, and asked why I would help the KKK. I told him that I wasn’t there for the KKK, I was there to keep him safe and out of trouble.

At the end of the event, the KKK left the statue without getting their message across. The counter-protesters drowned them out. A Charlottesville Police Department supervisor announced that the permitted rally had ended and declared an unlawful assembly when the protesters refused to leave.

Eventually, I stood in a police line across from a group of angry people who cursed me, called me an Uncle Tom and recorded my name. Less than an hour later, the police ordered that same group of people to leave the area around the Charlottesville Juvenile and Domestic Relations District Court on High Street. But, rather than leave, an individual from the group assaulted an officer, then huddled on the steps with the group. The officer warned he would pepper spray them if they refused to cooperate. When they refused, the officer used the spray and inadvertently sprayed me as I was kneeling and pleading with the group that the KKK wasn’t worth what was about to happen. Face on fire, part of me wanted to walk away. Why help after how they treated me? But instead, I found water and flushed the chemicals out of the eyes of protesters. I did it because I cared. It was my job. 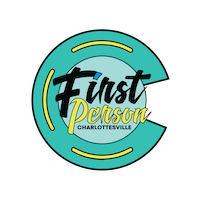 What happened leading to and on July 8, 2017, was not the only time I experienced the difficulty of being a Black police officer. I advocated within the department and the commonwealth attorney’s office on behalf of both minority victims and suspects. I remember explaining to coworkers that Thomas Jefferson having a Black “mistress” was not an example of why he wasn’t racist. Sally Hemmings was not free. When I straightened my hair, the back end of the compliment I received was, “You’re supervisor ready.”

I also faced adversity from the Black community. With limited knowledge, no facts, or false information, family and friends argued with me about police tactics and officer-involved incidents. Citizens called me a sellout, a disgrace, and accused me of sucking the white man’s dick. My son, not even 10 years old, defended me against anti-cop rhetoric taught by adult, Black educators.

On July 8, when I stood in uniform between those two men, I felt that Black man’s pain. It was the pain in my husband’s eyes, the pain I hope to protect my son from. After the rally, my co-workers acknowledged my pain and the tears in my eyes. Not the pain from the pepper spray or the tear gas that the police department later released, but the pain I felt from witnessing the KKK come to town and the hatred I received from the community. Ultimately, fellow officers had my back, and I felt their pain too. They were good men and women who got up every day to help people, only to be hated. It hurt when I realized that besides immediate family and a few close friends, no one from my church or the community checked on me.

When I joined the Charlottesville Police Department in 2012, I began a career I enjoyed. I loved the work and the chance to help people. When I made detective in 2016, it was a dream come true, a decades-long goal achieved.

But despite working with great men and women, like many in the Black community, I grew up with a certain level of distrust for the police. That distrust never completely goes away. When I was outside the Charlottesville area, a part of me still felt police were a threat. That part of me still gives my son the “how to act around police” lecture.

That part of me also made me take my responsibility seriously. On any given day, I knew I could be the face that a person felt they could trust, possibly de-escalating a bad situation. I engaged in community events so people would know that not only was there representation but that it was okay to choose law enforcement as a career.

Fast forward to 2020. I was tired of fighting the system for what I believed was right, tired of arguing with family and friends, tired of the burden of, “But that’s why they need you there.” So I walked away from a career I’d once thought I would retire from. It was and still is a heartbreaking decision.

At work, it was a struggle to be Black, and at home, it was a struggle to be blue. Now, when I hear community members and police organizations talk about needing minority officers, I wonder if they consider the toll of what they are asking. Are they prepared to offer the support and education that Black officers need to be and feel successful both in the department and the community or are they just checking the diversity box and moving on?

Editor’s note: We’ve corrected the name of the statue where the KKK rally gathered. Thank you to readers who pointed out our error. 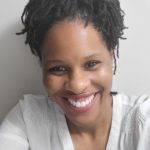 Written by:
Regine Wright
Regine Wright is a private investigator, Army veteran, and former police officer who lives in the Charlottesville Albemarle area with her husband and son. She is dedicated to helping others and enjoys all things true crime.