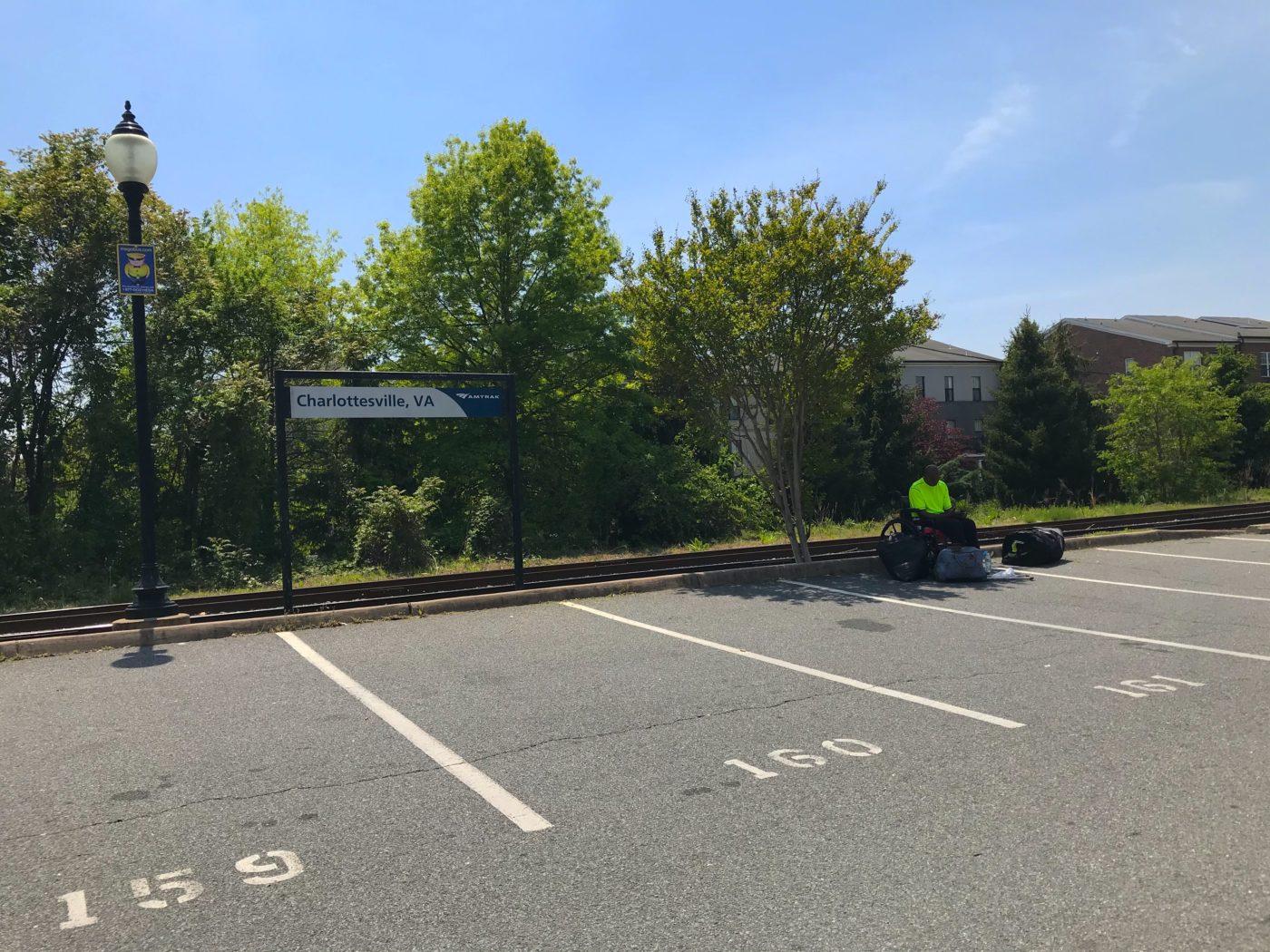 Teddy — not his real name — sat in a puddle of shade at the edge of the Amtrak train station parking lot last week, his suitcase and two drawstring bags plopped on the hot asphalt next to his wheelchair. He held his smartphone in one hand and scratched his head with the other while looking at the screen. “I don’t know where my bus is,” he said. “I just don’t know.”

He was pretty sure he was in the right place to catch his Greyhound bus: parking space number 159 in the Amtrak lot. At least, that’s what the paper sign taped to the window of the former Greyhound Lines bus terminal said.

The company suddenly shuttered its station in February 2021 and installed an open-air stop at 105 Ridge Street, next to the Music Resource Center building. Since then, Greyhound has moved its stop four blocks west, to the parking space in the Amtrak station lot at 810 W. Main St., where Teddy waited last week.

Read more about the initial change, as well as who typically rides Greyhound and why.

This particular change took effect Nov. 1. Now, Greyhound passengers can wait inside the Amtrak station for arrivals and departures, Crystal Booker, a spokesperson for Greyhound, wrote in an email to Charlottesville Tomorrow.

Still, riders remain confused and disheartened. They’re feeling the consequences of some major shifts within the company.

Greyhound has closed down several terminals in the United States over the last two years, moving them instead to open air stops. Booker said the move in Charlottesville was “a result of evolving operational needs, resulting in the sale of the original building.”

When asked if Greyhound made the decision in order to save money, Booker said that “it was an operational decision which includes a number of factors. For competitive reasons, we do not share those details publicly.”

Over the last two years, Greyhound lost millions of dollars because of the COVID-19 pandemic, which wreaked havoc on the entire transportation industry. People were urged to stay close to home (if they could) in an attempt to stop the spread of the virus — they weren’t riding, flying, even driving, nearly as much.

“The industry all but came to a stop in 2020,” said Peter Pantuso, president and CEO of the American Bus Association. The bus/motorcoach sector was hit particularly hard. After April 2020, the entire bus industry — commuter buses (like public transportation), scheduled service buses (like Greyhound) and private coach services (i.e. charter buses) —  “was down more than 85% in 2020,” he added.

Currently, the bus industry as a whole is operating at about 60% of its pre-pandemic capacity.

Before the pandemic, about 3,000 different bus companies operated in the U.S.; that number has since been cut nearly in half, said Pantuso. Fewer riders has meant less frequent and sometimes fewer routes, which require fewer drivers, fewer buses.

Drivers and other staff were laid off. Others chose to retire, or left for a different industry, like long-distance truck driving, said Pantuso.

Greyhound is not the only bus company struggling, but it’s the largest of the U.S. inter-city bus services and thus its challenges affect a lot of people.

Greyhound’s annual revenue declined almost by half from fiscal year 2020 to 2021, according to its former parent company, FirstGroup. (In October 2021 FirstGroup sold Greyhound to German transport company Flix SE.) Greyhound reported $766 million in revenue in FY 2020, and $422.5 million in FY 2021. A $343.5 million drop.

While public transit, Amtrak train service, and private airlines received billions of dollars in aid from the U.S. government to keep their companies and services afloat during that time, intercity motorcoach services — like Greyhound — were left entirely out of the 2020 CARES act, CityLab reported for Bloomberg.

In the relief package passed in December 2021, motorcoach companies received a fraction of the money given to companies in other transportation sectors, the report also noted.

Greyhound responded to those financial losses, in part, by stopping its services altogether in Canada. During that same time, the company also shuttered multiple full service stations in the U.S. in favor of open air stops.

In Erie, Pennsylvania, the terminal simply closed. In Knoxville, Tennessee, the stop was moved to a gas station. And in Charlottesville it was moved to a parking space in the Amtrak lot.

The decision to move toward more open air stops was not, Booker said, due to the pandemic.

“We completed a thorough review of our business in Charlottesville and decided to transition to the aforementioned industry-wide model so that we can continue to provide this essential service to the community,” Greyhound spokesperson Booker wrote. “Similar to the rest of the intercity bus industry, Greyhound stops may include convenience stores, gas stations, restaurants, and curbside locations.” 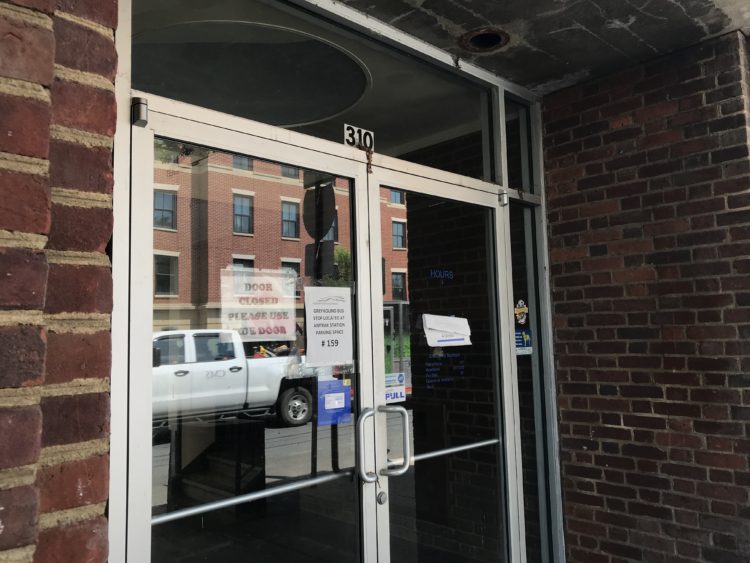 A paper sign taped to the door of the now-shuttered Greyhound station on West Main St. tells passengers where the new stop is located. The station closed in February 2021 and the company installed an open-air stop around the corner, at 105 Ridge Street. In November 2021, Greyhound moved the open-air stop to the Amtrak station, a few blocks away.

Much like the previous Greyhound stop on Ridge Street, the new one in the Amtrak parking space stop has no shelter, no ticketing counter, no kiosk, and no on-site staff to help answer questions or to assist folks who use wheelchairs and other mobility aids to get around. Teddy needed some water and something to eat, but his options at and around the Amtrak station were limited to Mel’s Café, sit-down restaurants and an upscale butcher shop. He feared that if he left his spot in the lot, he’d miss his bus.

As Teddy sat and waited, a few other passengers hovered around the parking lot, wondering where their bus was, whether they were in the right spot. Another passenger, named Brittany, feared she’d missed her bus as she waited in line for the bathroom at the Amtrak station — which is on the other side of the parking lot.

Brittany exhaled with relief when Teddy and others told her no buses had come and gone, but she soon started to pace back and forth across the lot, saying “this is ridiculous.”

When a bus arrived a little after 2 p.m. in the sunny-skied afternoon, a few passengers walked over from other areas of the parking lot and quickly voiced their frustrations to the driver. “I’m waiting outside!?” said Brittany, emphasizing the word “outside” as she handed her printed paper ticket to the driver. “We’re all struggling out here,” she said to sounds of agreement from others who’d stepped off the bus for a cigarette break.

Brittany gestured in Teddy’s direction and asked how the company could treat passengers like this. “This is bullshit,” she said.

“Bullshit,” said another passenger, nodding his head while taking a drag of a cigarette.

“I waited seven hours in Richmond,” said another between puffs of sweet-scented vape smoke. (Richmond has a full-service station.)

The driver apologized to each waiting passenger individually as he answered their flurry of questions. He didn’t have more information on other buses, he told them. He only knew who was supposed to get on his bus in Charlottesville. He nodded his head with each complaint, telling passengers he understood, he understood. 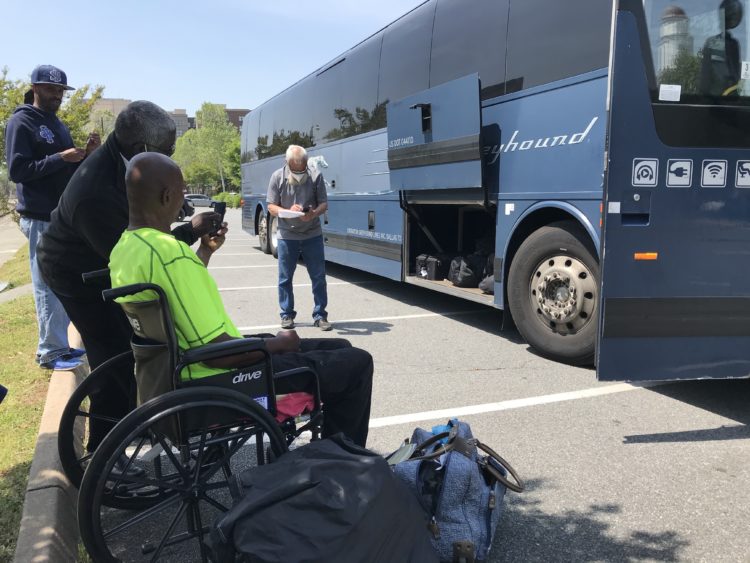 Without announcements, posted schedules or bus line staff to assist, passengers must rely on their digital or printed ticket for information about when their bus will arrive or depart. Fellow passengers help one another as they can. Drivers try to clear up any confusion, though they typically only have information about who is, and is not, boarding their bus.

Once the driver loaded passengers’ luggage into the bus undercarriage, Teddy asked him if another bus — the one heading north, not south — was on its way. “I just need to know about my bus,” Teddy said.

The driver looked at Teddy’s digital ticket and said that the bus would arrive, he just couldn’t promise Teddy when. “I don’t want to lie to you,” the driver said.

Teddy’s bus arrived about half an hour later, to carry him home to New Jersey for the first time since 2014. He’s taken Greyhound many times before and he’ll take it again, he said. He just hopes the wait will be more comfortable — and less stressful — next time.

Whether Teddy’s hopes come true remains unclear. It seems bleak out there for buses.

An uncertain economy and inflation means that people’s paychecks aren’t going as far, which often means people have less discretionary income for things like travel, Pantuso said. And folks still hesitate to ride any distance in close proximity to others and will work from home if they can, he added.

But “the industry is coming back. It’s a very slow return,” Pantuso said. He doesn’t expect things to return to near-normal until late 2023. Even then, he expects some things — like work patterns and thus commuter operations — are forever changed.

“We’re going to have to get back to a normal pattern, or figure out what the new normal is, before the industry fully recovers.”

For Charlottesville’s Greyhound service, the new normal is a bus stop in a train station parking lot: Booker, the Greyhound spokesperson, said there are no current plans to relocate the stop or open a new terminal.