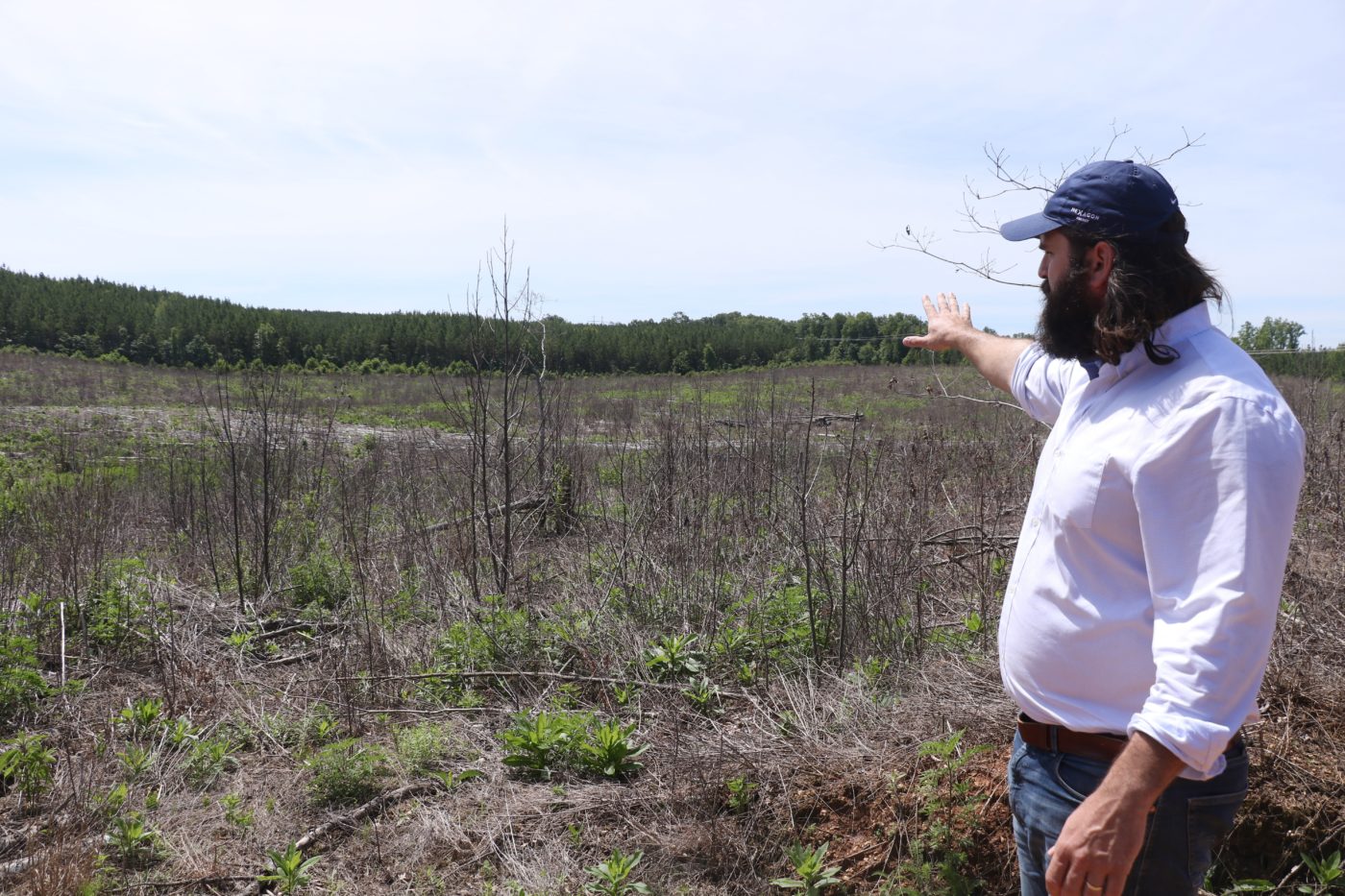 This cleared timber field is the proposed location of a potential solar farm. Scott Remer, a developer with Hexagon Energy, explains how his company plans to install solar panels.

A new harvest could be coming to Albemarle County — a solar farm that could power more than half of its homes to be exact.

Hexagon Energy has teamed up with a privately owned timber farm to install about 650 acres of solar panels. If approved, it will be the largest solar farm in the county and could power some 25,000 of the county’s roughly 45,000 homes.

Approval from PJM — the regional grid management company that operates the electrical grid from North Carolina to New Jersey — is expected to be finalized by August. The Albemarle County Board of Supervisors will then have final say over whether the project goes forward.

The proposal is being reviewed by county staff. Board of Supervisors Chair Donna Price said in an email that she will reserve judgment until the board sees Hexagon’s final application and hears from the county’s staff and planning commission. With special use permits filed last month, the project is expected to go before the board later this year.

Solar farms of this size were not attainable in Virginia until recently. Large energy companies have been hesitant to invest in renewable energy projects, and local governments were hesitant to approve them. That’s starting to change.

Prior to 2020, the state placed limits on the amount of energy that renewable energy companies like Hexagon could produce within territories services by utility companies, like Dominion. The Virginia Clean Economy Act, which took effect in 2020, reduced those limits.

The Act also requires utility companies to phase out their coal plants. This is forcing energy companies and local governments to approve more renewable energy projects, like solar, in order to keep lights on.

Solar farms have been sprouting up around the state in recent years — spurred in part by VCEA. Recently, Albemarle County approved an 8 megawatt solar energy facility near Batesville that was proposed by SunTribe Solar.

Locally-based, Hexagon has projects in several states but their Woodridge proposal is a “hometown project.” 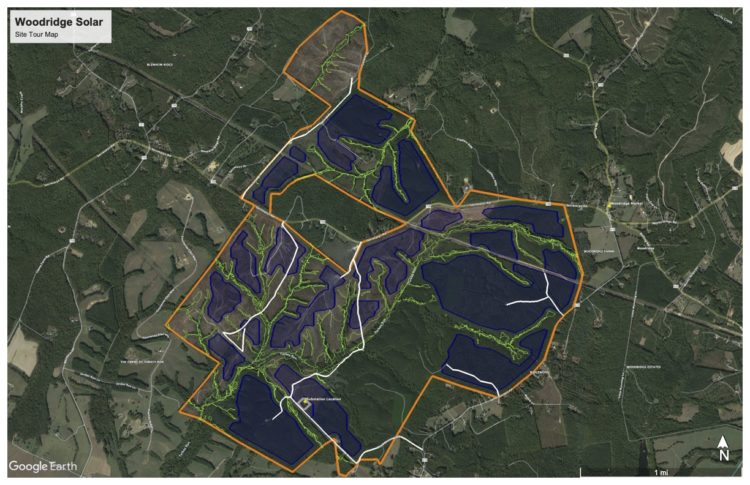 Hexagon Energy created a site plan map, indicating the boundary of the property and shaded blue areas are where it intends to install solar panels.

But even with the increased interest in solar projects, there are challenges renewable energy developers have faced and could still face, said Scott Remer, a developer with the company.

Grid connection and local permitting are two of the biggest hurdles developers encounter when getting solar projects off the ground. Some of the hurdle comes down to an aged power grid that may not be able to handle an infusion of solar energy, or that a suitable place for a solar farm is nowhere near where it can reasonably connect to a power grid.

These factors can cause a local government to pass on a solar farm proposal — as is their purview to do so.

“There is often a disconnect between what a state’s clean energy goals may be and what can actually get built in that state’s municipalities,” Remer said.

Communities have pushed back against solar projects for other reasons. One is concern over land use. The notion of using ground space in agricultural areas for something other than agriculture has been cause for hesitancy by some.

“Every action we take is a trade off,” Remer said. “If we do something with land, we can’t do something else with it, right?”

Solar installation may not be a good fit where there are crops for food being grown or an old-growth forest with various plants and animal life, he said. A large-scale solar farm would also not fit well in cities with higher density (though he said some rooftops are ripe for solar panels).

“But, on the other hand, we need clean energy produced, how do we get that balance?”

Remer anticipates some back and forth with the county’s planning office to fine tune details before holding a public hearing with the Planning Commission. Though the county will not confirm its timeline, Remer estimates that the Board of Supervisors will vote on the project before the end of the year and panel installation could begin by next summer — if it’s approved.

“What’s really cool,” he said, is that this potential project in Albemarle can strike the balance.

That’s because having been the site of tree farming for so long, areas of soil has become depleted, making it difficult to grow other crops on the site.

“We’re starting with a pretty degraded site anyway, that has been historically timber in a really intensive industrial process for about eight years. The topsoil is very eroded.”

On a recent tour with Charlottesville Tomorrow, Remer navigated deep tracks of erosion as he drove his truck through the site. Following a recent rain, mud splattered into the wheels. What is now barren land, unable to foster the trees it used to grow, may soon bustle with diverse foliage at the base of solar panels. 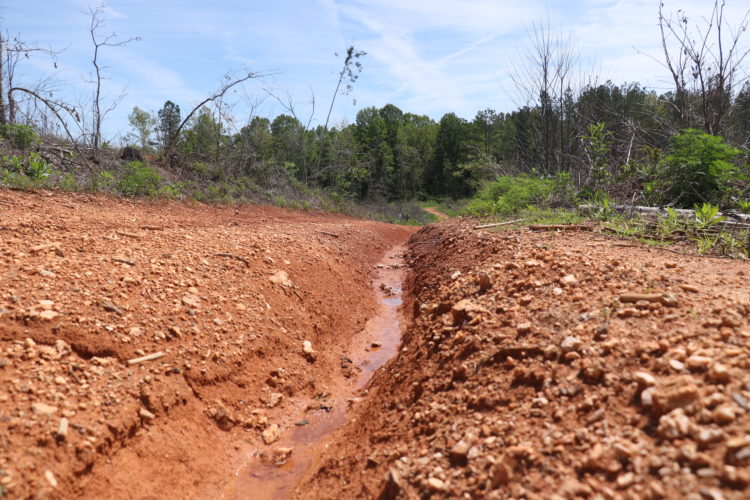 Portions of the soil on the property is eroded from years of growing the same crop repeatedly. Hexagon Energy hopes that targeted planting around the base of solar panels can encourage biodiversity and rejuvenate the soil over time.

Hexagon is hoping to team up with sheep farmers in the area to reduce the use of gas-powered mowing equipment to maintain overgrowth, Remer said.

Additionally, Hexagon plans to do stream restoration work and avoid installing panels close to water sources to prevent additional stormwater runoff. The Virginia Clean Economy Act and the Virginia Department of Conservation and Recreation promote this kind of pollinator-friendly planting near solar sites.

“These plantings that we’re going to put underneath the panels are actually going to fix the soil and help reintroduce a lot more groundwater infiltration into it,” Remer said. “We’ve got a chance to fix that massive site, while still producing power. So I think this project actually works and checks a lot of boxes.”

Another, more recent, hurdle for solar developers is the fact that there is a backlog of approvals by PJM Interconnection.

In April, PJM announced that it is putting a two year pause on reviewing and potentially approving energy projects — many of which are solar — due to an influx of interconnection requests by developers for projects to connect to the power grid. While it doesn’t affect this particular project, which had already been in review, it can impact others.

“This is a huge problem for climate goals because we need to be getting renewable energy on the grid as soon as possible,” said Susan Kruse, executive director of Community Climate Collaborative.

C3 is a regional nonprofit that advocates for environmental policy and business practices. While it is studying the Hexagon proposal and has yet to weigh in on it, Kruse noted that the proposal may fare well through PJM because it can connect to a retiring coal plant in the area.

Nearby in Fluvanna County, a coal and gas-powered plant is set to be decommissioned this year — providing the perfect opportunity for Hexagon’s project to connect to the grid in its place.

“There aren’t many projects of this size of this type that are able to move forward right now,” Kruse said.

Written by:
Charlotte Rene Woods
@charlottewords
cwoods@cvilletomorrow.org
I'm Charlottesville Tomorrow's government reporter. If you've got questions, send them to me! And if you haven’t yet, consider subscribing to our FREE newsletter to get updates from my whole newsroom on the things you want to know.