Charlottesville may soon impose a 5 cent tax on plastic bags 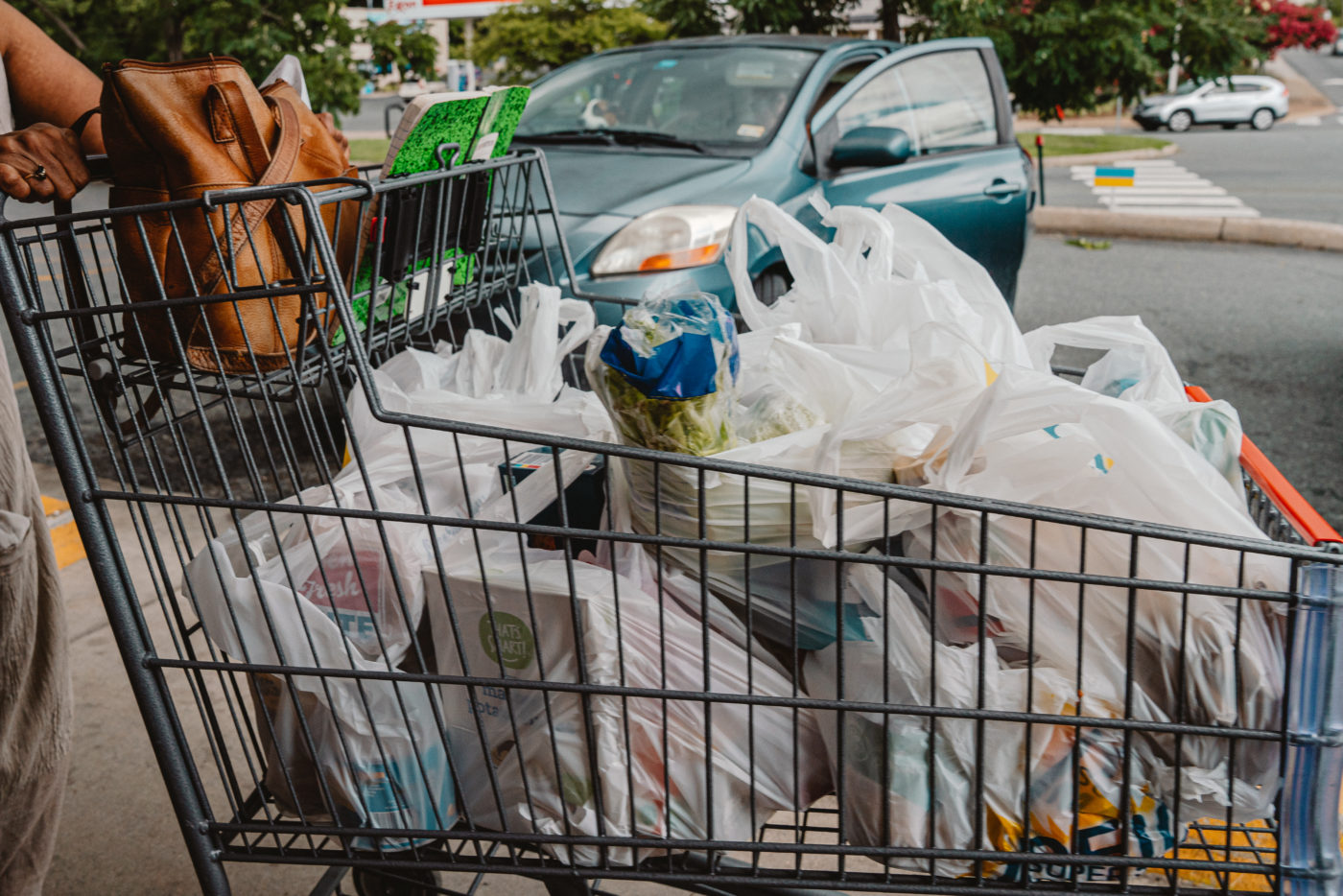 If the city implements a plastic bag tax, this customer would have been charged five cents for every plastic bag holding groceries in her cart.

The Council expressed support for implementing a bag tax at its Monday night meeting. But, before they vote, members will take comments from community members at a public hearing and hold a second discussion on Aug. 1.

“I’m excited to see how it all works out,” said Councilor Brian Pinkston. “I think it’s very promising.”

The proposal is to levy a 5 cent tax per bag on disposable plastic bags at grocery stores, convenience stores and pharmacies. Albemarle County adopted the 5 cent per bag tax in May.

There are more than 20 convenience stores, grocery stores and pharmacies in city limits. Many of the grocery stores in the area are in Albemarle County, such as Wegmans and Trader Joe’s. Stores like Aldi and Lidl, both located in the county, don’t use plastic bags.

As temperatures topped 90 degrees Monday afternoon, the shoppers at Reid Super Save Mart on Preston Avenue had mixed opinions about the proposed tax.

“I don’t feel like they need to do that,” said Shorika, who wheeled a shopping cart full of bagged groceries to her car. (Like others interviewed for this story, she did not want to give her last name.) While she understands that taxing plastic bags could help the environment, the city “should make another option” than charging people for bags.

Andy, one of just a few customers to bring reusable bags into Reid’s Monday afternoon, was happy to hear about the proposed tax. “They won’t be getting any money from me!” she said. “I highly, highly approve.”

The policy stems from state law that passed in 2020 granting local governments the ability to impose the tax. Eight localities in Virginia have already adopted the policy. Loudoun County was the most recent. Its tax takes effect this month.

Other cities and states around the country have similar policies. In 2018, California banned all single-use plastic bags. More than 150 Massachusetts localities have enacted some sort of ban or regulation (including on paper bags). Cities like Baltimore and Washington, D.C., have plastic bag taxes.

Environmental advocates tend to support such taxes because they encourage people to bring reusable bags when they go shopping. Placing a five-cent tax on single-use plastic bags was more effective at reducing the use of such bags than a five-cent bonus for bringing reusable totes, according to published in 2015 by Tatiana Homonoff, now a professor of economics and public service at New York University.

If people don’t bring their own bags, the tax they pay will contribute to local projects aimed at curbing climate change effects.

“The elimination of plastic bags is a positive for the environment,” said deputy city manager of operations Samuel Sanders in a presentation to council.

“We were getting requests to adopt a plastic bag tax even before we had the legal authority to do so,” Snook said. 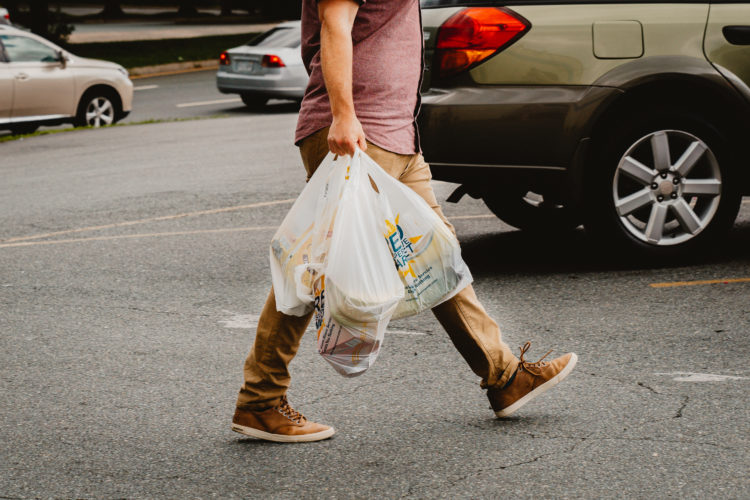 Though a few folks exited the grocery store with paper bags, most carried their food in plastic bags.

State law requires that localities use the tax revenue for environmental protection and climate change mitigation work, like environmental stewardship education as well as litter and pollution mitigation, or to provide reusable bags to people who receive Supplemental Nutrition Assistance Program (SNAP) and its subsidiary program specifically for women, infants and children (WIC). Neither Charlottesville City Council nor Albemarle Board of Supervisors have said what those local projects will be.

While environmental advocates celebrate the proposal, food justice workers worry about the impact it will have on low income people who already struggle to afford groceries. And not just people who receive SNAP and WIC benefits, said Aleen Carey, outreach and resource program director for Cultivate Charlottesville, a nonprofit food justice collective. There are many more people experiencing food insecurity who do not qualify for government food assistance.

(Disclosure: Aleen Carey is on Charlottesville Tomorrow’s board of directors. Board members receive no preferential treatment in our reporting and editorial processes.)

She and others at Cultivate Charlottesville are concerned about the effects a plastic bag tax could have on people who are food insecure. “We don’t want them to carry the cost for others in this way,” she said.

“The worst thing that could possibly happen is that someone gets to the grocery, has no idea [about the tax], has no other option, is getting taxed, and has that extra worry about their money getting far enough, especially with the rising costs of groceries,” said Carey.

At the same time, Cultivate Charlottesville supports taking action against climate change, including reducing the use of plastics, said Carey.

According to a 2020 United Nations analysis, “climate change is putting food production at risk. Yield growth for wheat, maize, and other crops have been declining in many countries due to extreme heat, severe weather, and droughts. By some estimates, in the absence of effective adaptation, global yields could decline by up to 30 percent by 2050.”

Still, “it’s a delicate time to introduce a tax if there isn’t a lot of community outreach that would go along with it,” she added.

In his presentation to Council, Sanders noted that ahead of the New Year, the city would work to distribute reusable bags.

“We want to make sure that we’re making an equity investment and then the rollout of this particular tax,” he said.

Of the dozen or so people Charlottesville Tomorrow asked about the proposed tax Monday afternoon, only one knew that Council is considering it.

“I think it’s a dumb idea, but it is what it is,” said Betty, who got into her car with a plastic bag in each hand. “I have my totes ready.”